I must say I agree with Vladimir Ashkenazy when he was asked to 'comment on Mozart'. What an one possibly say on the subject?  The infantile contemporary response so beloved of Facebook:  Like - Don't like?

When I am confronted with the music of any of the great composers, so much has been written that anything I could say is bound to be redundant, bordering on the dull, pretentious or conventional. However this year there has been a sea-change in my attitude to the genius Monsieur F. Liszt.

I have heard this year many of his orchestral works for the first time including some great performances of the Faust  symphony, symphonic poems, the late piano works and the rarely performed Via Crucis. Daniil Trifonov gave an unforgettable performance of the first Mephisto Waltz at Duszniki Zdroj reminding one what a great revolutionary he was in extending piano technique and the emotions capable of expression on the keyboard.

Concerning the keyboard works, the more Liszt I hear the more I feel he needs rehabilitation. He seems under so many flying fingers to remain the boisterous show-off, the cause of tinnitus, the breaker of pianos, the showman which in essence marked his virtuoso years and blighted his reputation as a serious composer. He abandoned this incredible concert career, a life of travelling that became an extraordinary journey in those days by coach and horse estimated at hundreds of thousands of miles. We have a different attitude now thank God to the inventor of the form of the Symphonic Poem, the author of the Faust Symphony. He spent so many contemplative years courageously composing yet suffered neglect and social exclusion in Weimar.


We really need to re-examine how he played, his effect on discriminating members of the audience. One lady in his audience described his eyes with mawkish hyperbole as being ‘like incandescent grapes’. I really think we have had enough of ‘the vapours’ whilst listening to Liszt.

We (the listening public) think we know this man in B movie terms but do we really? Take for example this remark by Moritz Rosenthal, his great pupil, on Liszt’s playing: “…the embellishments were like a cobweb – so fine – like the texture of the costliest lace.” Do we ever hear such things today except perhaps in historic recordings where tone and touch were paramount, not structure and form. Such precious remarks are ignored when we are ‘Down in the Quarry’ with too many pianists and their teachers.

Chopin once ironically confided to Liszt:

I am not suited to public appearances – the auditorium saps my courage, I suffocate in the exhalation of the crowd, I am paralysed by curious glances . . . but you, you can, since if you should fail to win over the audience you at least have the possibility of murdering them.
But more than these musical considerations I have come to have enormous respect for the man himself as a human being - his generosity of spirit, profound intellectual qualities, deep religiosity (yes, I believe this now after much reflection and thought) and his selfless dedication to the business of musical education of his fortunate students. This I gained through my long visits to the magnificent exhibition at Weimar and Bayreuth this year.

To gain a true perspective on Liszt's greatness it is absolutely indispensible  to dive without fear into the three volumes of Alan Walker's exhaustive and rich musical biography.

Reading these volumes of his monumental Franz Liszt (London 1983-1996) this year changed forever my attitude to this great composer as both man and musician. Liszt remains a victim of his own celebrity status as a performer, perhaps one of the first in the current long list of casualties. He always found it difficult to be taken seriously as a creative force and we have inherited the residue of this prejudice. The account of his death in Bayreuth unfortunately and ironically in the midst of the Wagner festival, abandoned by so many of his family and friends to terrible illness and a lingering and painful conclusion of this life, makes grim and salutary reading on the vanity and emptiness of fame. One cannot help but reflect philosophically on the nature of death after this moving account of a man who was the first European 'superstar'.

Ever since the days of my youth I have considered dying much simpler than living he had written but discovered he was wrong as the ultimate moment of life approached.

Below are few photographs and observations not previously published on my Liszt blog this year.


And so we bid farewell to the Franz Liszt 200th Anniversary celebrations at the Liszt Museum in Weimar as a sheaf of his music, which he carelessly left on the window-sill, is carried by a favourable gust of wind to the four corners of the earth.... 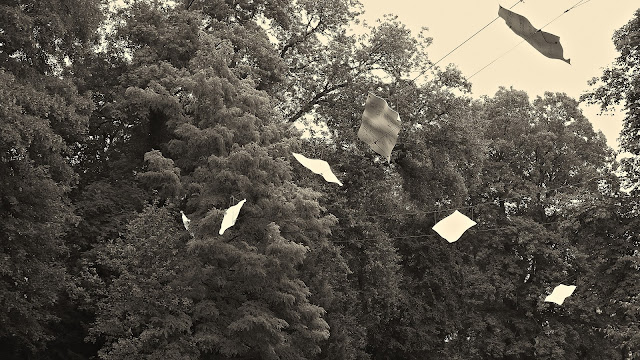