I recently received my membership documents from the GRRC (Goodwood Road Racing Club) and a week or so later the annual luxurious and quite brilliant Goodwood Magazine. Of course it presents a style of life and expenditure that I can only dream of in real terms but this issue was particularly interesting with superbly illustrated articles on the Porsche 911 (50th birthday), William Knight the outstanding Goodwood horse trainer, the racing legend Jimmy Clark, the Boultbee Spitfire Academy where you can train to fly a Spitfire and a celebration of two decades of the Goodwood Festival of Speed. I managed to attend the Goodwood Revival in 2009 in my concours 1949 MG TC (black with Apple-green Collingburn interior) and am still recovering from the cost from Warsaw of that sublime weekend.

More on the history of my association with classic cars if you are interested:

But of great interest to me personally, to my joy there was an illustrated article on Hellé Nice (the stage name of Hélène Delangle) - dancer, stripper, cabaret artiste and driver of GP Bugattis and Alfas between the wars. The article was by the author Miranda Seymour based on her book The Bugatti Queen (London 2004).

I am not usually envious of the biographical subject an author selects but how I wished fate had passed me into the arms of  Hélène Delangle. My kind of woman who I fell deeply in love with after reading this book.  Below are some photographs taken from it and the Amazon review I wrote 9 years ago after reading it. I cannot recommend this book more highly to anyone interested in authentic living, chic style, risk taking, love, uninhibited sex and sheer joie de vivre unencumbered by the emasculating political correctness and health and safety nonsense that has descended upon us like a suffocating and poisonous miasma. 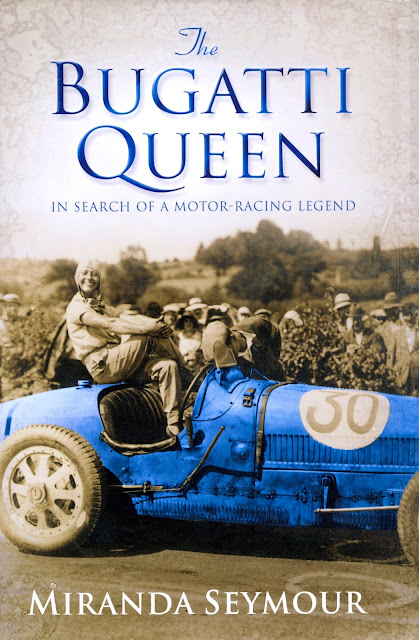 This enthralling story of the spirited and brilliant female racing driver Hellé Nice reads like a modern version of a Balzac novel.

It chronicles her intensely adventurous, glamorous and glittering career driving Bugattis, Alfas and other assorted exotic machinery in the south of France, Italy, Brazil and the United States. This with the added frisson of knowing that the girl in question was a drop-dead gorgeous dancer, nightclub stripper and wildly promiscuous.

After gathering all the glittering prizes, her life descends inexorably with the hubris and inevitability of Greek tragedy into desperate poverty, loneliness and ill-health, cruelly neglected and disinherited by her provincial and slightly retarded and dysfunctional French family, abandoned and robbed by her lover. Her downfall was precipitated by a vicious betrayal at a glamorous party when she was publicly accused by the famous and so-called 'cultivated' driver Louis Chiron of collaboration with the Gestapo during the occupation. She subsequently lived in the care of a benevolent French charity until her death in utter obscurity. Her plain, dull sister Solange vindictively omits her name from the family gravestone (now restored) so tormented was she by a primitive and gnawing envy of her joyful and champagne-filled life. Pure Balzac transported to last century.

But the book is far more than that. It is a brilliant evocation of the almost unbelievably reckless nature of 1930s racing. It describes the violent deaths from tremendous accidents that often resulted on the banked courses and unregulated tracks that were so popular in those days. Hellé herself crashed in Brazil killing and injuring many spectators - something that haunted her for the rest of her life. It paints a wonderfully eloquent picture of the aristocratic temperament of those times, courting hazards with ease and negligence; a portrait of those rash, wealthy sons who diced with their lives among the other esoteric pleasures of the Bugatti racing circle. Miranda Seymour's economical style portrays these tragic, even spectacular deaths like so many stabs to the heart. Shocking and desperately moving accounts. The arbitrary nature of torture and execution in Nazi occupied France is similarly treated with fierce economy.

I have only driven a Bugatti T35 once in my life and that around Hamptead Garden Suburb – rather sad but there you are. Yet it was the greatest driving experience I have ever had - the car absolutely alive with the nervous and fractious energy of an Arab stallion. The sound of the engine courses through one like electricity. Seymour captures this pace and excitement in her book as it breathlessly bowls along like a Bugatti itself.

I am also an author with a passion for vintage machinery and the fabulous style of the politically incorrect 1930s - such creatures as Hellé Nice we shall never see again. Oh that I had had the luck to come across this wonderful story and had been born earlier.

Please God, someone make a movie of it! Do read this fantastic biography. Like the author, I too have fallen in love with the ghost of Hellé Nice.

Interesting Link to the Hellé Nice Foundation and Project :