I decided to make the effort to attend the birthday recital at Zelazowa Wola by the brilliant and outstanding Chopin pianist Kevin Kenner. The intimacy I remember of my first visit to the dworek and hamlet in the early 1990s has disappeared with a quite understandable development of the site to cope with the freedom of global touristic movement that Poland now enjoys - restaurant, ticket hall, shop, recital and lecture theatre - the full unfolding of facilities for visitors but with the inevitable loss to the poetry of the domain. I would like to quote my first impressions of what was once a deeply poetic place. In an access of nostalgia the extract comes from my book abut Poland entitled A Country in the Moon. 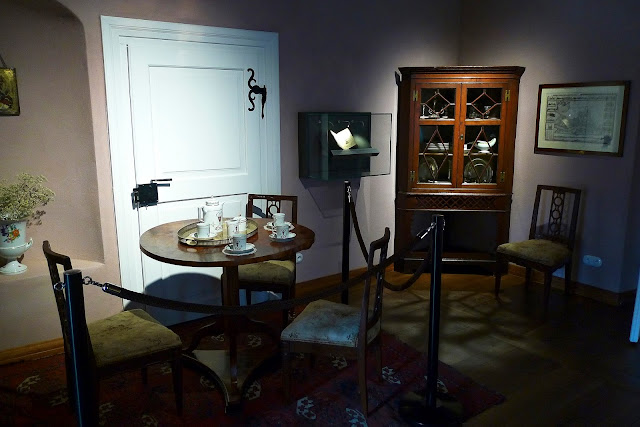 In late spring, in a despondent frame of mind, I decided to raise my spirits  with  a visit to Chopin’s birthplace  at  Żelazowa  Wola,  a hamlet about fifty kilometres from Warsaw. The flat Mazovian landscape was relieved by stands of trembling birch and pine; forlorn willows with gnarled boles lined the deserted roads. I had long anticipated this visit to what musically, for me, was an almost sacred place. I wandered  through the still and muffled park. A subtle atmosphere of reverence is created here among the groves of trees, the  serpentine  paths  winding  between hedges  and  over  the  little bridge above the Utrata  river. Long-leaved  aquatic  plants  flowed like Ophelia’s hair in the current.  It was almost dusk as I made my way to the softly lit entrance of the dwórek. I leaned against one of the columns of the porch  and looked  into the depths  of the park over the still pond with the dim carp.

I stooped to pick up a weathered chestnut and idly polished it on my coat. An old piano tuner I knew in Warsaw gave chestnuts from this park to piano students  at the conservatorium, telling them to hold  them  close  to  their  hearts  as they  contained ‘the  spirit  of Chopin’. He claimed he had also seen the disembodied hand of the composer  appear  on  a banister  in the dwórek  late one  night  after tuning the piano for a concert.

I pushed aside the heavy brocade and leather curtain at the front door. Only  about twenty-five people could be accommodated in  the  tiny  room.  A  brass  candelabra with  the crowned Polish  eagle resting  between  the branches  stood  on the small grand piano. Warm yellow light flickered on the portrait of the composer  and fitfully illuminated  the painted  beams of the dwórek. The young  pianist, a French  girl, had ambitiously chosen  to play both sets of Chopin études. Her little dog lay under the instrument fast asleep. Snow fell gently and silently against the windows and built up on the ledges.

A cloud hovers over the birth date of Fryderyk in a rather characteristic Polish way. The year 1810 is not seriously in dispute but the Chopin family insisted on March 1 while the baptismal certificate records a birth date of February 22. Celebrations in Warsaw occur throughout the week, which covers all possibilities.

At this time (1810) Warsaw was an extraordinary melange of cultures. Magnificent magnate palaces shared muddy unpaved streets with dilapidated  townhouses, szlachta farms, filthy hovels and teeming markets.  By 1812 the Napoleonic campaigns had financially crippled the Duchy  of Warsaw.

The French Ambassador commented:
'Nothing could exceed the misery of all classes . . . I even saw princesses quit Warsaw from the most extreme distress’.


Chopin spent his formative years in Warsaw during this turbulent political period and the family often escaped the capital to the refuge of the Mazovian countryside at Żelazowa Wola. Here the fields are alive with birdsong, butterflies and wildflowers. On summer nights the piano was placed in the garden and Chopin would improvise eloquent melodies that floated through the orchards and across the river to the listening villagers gathered beyond. To this day, the atmosphere is recaptured in summer when the windows of the dwórek are thrown open for recitals and the audience wanders in the elegant gardens or leans on the railing of the small wooden bridge and gazes into the dreamy waters of the Utrata.

On this occasion I was astonished that only some nine people had come to hear this recital in this enchanted spot, so dear to the hearts of all Chopinists. There had been a last minute change of pianists and Kevin Kenner had courageously stepped into the breach at the last moment - all the more remarkable as he would also be required to give the birthday concert in the evening in the Warsaw Filharmonia.

He would be playing on an period Erard instrument. 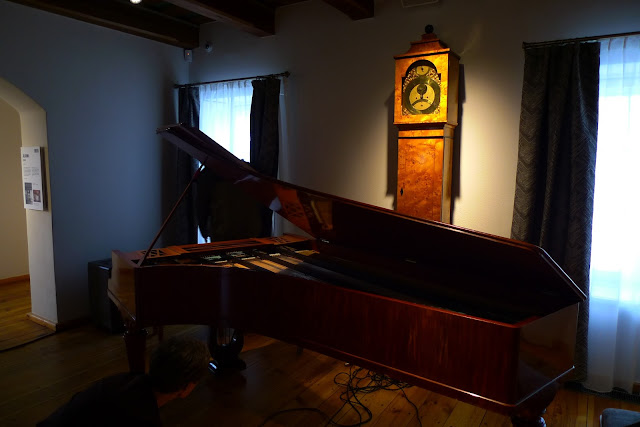 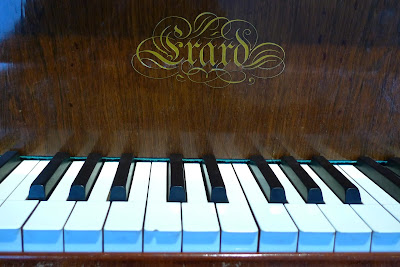 He opened his recital with an eloquent and deeply expressive account of the Nocturne in D-flat major Op. 27 No: 2. This led directly into the Barcarolle with ineffable gentleness. Kenner is the only pianist I have met who understands that the opening octave is simply a gentle gesture of push off from the wharf by the gondolier with his characteristically long oar, a way of setting the almost Debussyian impressionistic tonality of the work. To connect it to the Nocturne in this way was a decision of subtle and refined musical and poetic insight. In the autograph manuscript (Zweig MS 27 British Library) the octave is not marked sforzando in the way too many pianists (even among the greatest) begin a work that flowers in an arc from suggested, reflective emotional reticence by the lovers on the Venetian lagoon to the culmination of declared passion and its gentle subsidence into resignation and final triumphal security.

Then the Scherzo in C-sharp Minor Op.39 that was inspired by Majorca and the atmosphere of Valldemossa, interrupted by the composer's illness. Kenner has recorded all the Scherzos for the Chopin Institute Black Series on an Erard period instrument. I can do no better than quote the great musicologist Mieczysław Tomaszewski concerning this scherzo:

The music is given over to a wild frenzy, mysteriously becalmed, then erupting a moment later with a return of the aggressive octaves. And then… the tempo slows, the music softens. Like a voice from another realm comes the focused, austere music of a chorale, interspersed with airy passages of beguiling sonorities.

Kenner gave a convincing account of this extraordinarily passionate, bizarre work so repelete with seductive grotesqueness like a gargoyle on the cathedral of Notre Dame, a passionate unrestrained outburst of pain without persuasive relief.

The Waltz in E Minor Op. post. for me could have had slightly more lightness and rhythmic affectation. It is very personal matter how one approaches the interpretation of the Chopin waltzes, either as virtuoso display pieces taken rather up tempo or an expression of civilized nineteenth century grace and refinement with moderate tempi (rather as Arthur Rubinstein does). Very much a personal matter. Kevin Kenner of course played the piece superlatively well but possibly to seriously for me. The three Mazurkas op 56 Nos: 1, 2, 3 were of the highest order of interpretation with all the nostalgia for Poland and the artistic sublimation of the dance one could wish for - poetry, grace and refinement in abundance here.

The  Ballade in G Minor Op. 23 was a very fine performance that emerged like a dramatic narrative opera with shifting scenes delineated yet cohesive as a complete whole in a conception and (sonata?) form. The notion of a virtuosic catharsis at the conclusion was brilliantly brought off in this deeply ambiguous work. The tensions and relaxations of the thematic arch which contribute so much to its tragic nature, were outstandingly managed. The recital concluded with a majestic and noble account of the 'Heroic' Polonaise Op. 53  although I did feel on occasion the rhythmic nature and character of the polonaise genre itself was occasionally obscured by the spirit of patriotic resistance.

After the recital I wandered in the still wintery park, bare of trees and people, reflecting on the nature of time, the seemingly inevitable juggernaut of 'progress' which eclipses the fragile poetry of intimacy, so fragile as to be rationalized out of existence at a stroke.