London has irresistible musical and artistic attractions and over the last three weeks I have sampled what the great metropolis has to offer. However during my aesthetic promenade among the paintings of Modigliani, Picasso, Monet at the National Gallery and the Impressionists at the Courtauld, I did not anticipate I would have one of the great musical experiences of my life - a recital by the visionary Polish musician and pianist Piotr Anderszewski interpreting Bach and Beethoven at the Barbican.

'...a man who being possessed of more than usual organic sensibility, has also thought long and deep…’

From the opening of the three Preludes and Fugues from Book II of Das Wohltemperierte Klavier we felt incontrovertibly to be in the presence of such a philosophically reflective and imaginative artist. This became increasingly clear and utterly convincing as the recital progressed.

The first Prelude in C major BMV 870 preserved a fine legato with no forcing of the tone in the difficult sustaining of the long notes on the piano perhaps originally intended for the organ. The lively Fugue was finely articulated clearly delineating the voices and counterpoint until the sonorous conclusion. Next No: 17, the A flat major Prelude and Fugue BMV 886. Donald Tovey refers colorfully to the Prelude as possessing '...the swing of the bass, like the censers suggested by the Sanctus of the B Minor Mass'. Anderszewski preserved a beautiful singing line with varied dynamics and a beautiful lightening of the articulation. Then a magnificent rendition of the Fugue written mainly in Triple Counterpoint. He invested this with what one might term the 'seductive austerity' of a granite sculpture - superb. Finally No: 8, the Prelude and Fugue in D-sharp minor BMV 877. Interestingly Tovey compares the light touch and arpeggio formulas in the Prelude, quavers and semiquavers that 'preserve the indolent flow' in a similar manner to Chopin's Berceuse and Andante spianato. Was it simply my imagination that this Polish pianist seemed to understand this suggestive remark perfectly well? In the fine Fugue, I appreciated Anderszewski's richly resonant and glowing tone that filled the dry acoustic of the hall yet never broke the sound ceiling of the instrument.


Then to my favourite of the English Suites, the third in G minor BMV 808. I used to play this on the harpsichord but was unreservedly convinced of it yet again on the piano by this inspired Bach player. Bach composed these suites in Weimar (incidentally one of my favourite towns in Europe) probably around 1715. As with many names of musical works, 'English' has a vexed origin.

Anderszewski played the opening Italianate Vivaldiesque Prelude with tremendous panache and elan bringing out every variety of detail, articulation and ornamentation, 'hidden' voices emerging as a cantabile song in the left hand, the whole movement replete with terrific imaginative articulation. An absolute joy to hear! The Allemande  was as noble and dignified a dance as one would desire in a mood of restrained aristocratic detachment. The Courante was more Italianate than French in character, played in a 'running' or 'flowing' style of great elegance and refinement.

The following slow Sarabande was the most heartfelt and moving rendition of this I have ever heard. The intensity of feeling and meditative, contemplative inward communion of heart and soul moved one desperately with Bach's impassioned harmonies and exquisite ornamentation, all communicated directly to the spiritual life of the audience. As James Talbot wrote in 1690 of the Sarabande form '...apt to move the Passions and disturb the tranquility of the mind'. One could have heard a pin drop....

The heart was then lifted by the light and immensely joyful contrast in mood of the first Gavotte. The inner attention to detail, articulation, ornamentation and variety of dynamic and harmonic, sometimes pastoral meandering of the bagpipe drone (la Musette) was quite magical. Yet he remained nostalgically reflective at the close at such an expressive lower dynamic. The Gigue was possessed of tremendous restorative energy, impetuousness and wondrous control of the crisp counterpoint, dynamic and articulation in an unstoppable forward-moving momentum until the triumphal optimistic close. Surely one of the greatest Bach interpreters of our time.

After the interval, the great work that in many ways is identified with Anderszewski as the consummate interpreter, the Beethoven 33 Variations on a Waltz by Anton Diabelli  Op.120 (1819-23).

What a fortunate hinge of fate that the Electorate of Bavaria decided to close the monasteries in 1803! Anton Diabelli (1781-1858) had trained for the priesthood but was ejected during the secularization process and sought alternative employment as a musician. He had shown previous minor distinction in this field of endeavor, composing pleasant, undemanding light music. As a clever publishing ploy he invited fifty eminent contemporary composers to contribute variations on a waltz he had composed and no doubt wished to publicize and presumably sell in profitable numbers. It was published in 1823-4 as the Vaterländischer Künstlerverein (Grove translate this as the 'Patriotic Artists' Association'). Beethoven published his contribution as 33 Veränderungen über einen Walzer von Diabelli. He wrote it over a relatively long period with significant interruptions (the Missa Solemnis was composed during this period and quotations from it can be found in the variations). More accurately perhaps Veränderungen could be translated as 'Transformations' which may have heralded a new and different genre to 'Variationen' in Beethoven's mind.

Among others, Schubert, Hummel, Czerny, the young Liszt (8 years old) and Beethoven (who commented that the waltz was merely 'a cobbler's patch' despite being a friend of Diabelli) all agreed to provide one variation. Beethoven in a characteristically obdurate, perhaps cantankerous  gesture rose to the challenge and decided to create 33 Variations on this insignificant scrap of a theme. Perhaps he was trying to demonstrate his consummate power to transform an elephantine leaden tune into a golden work of art.

Unlike the beautiful theme of the Goldberg Variations that is so immediately seducing, where exactly is Diabelli's theme? Hidden somewhere among the heavy nineteenth century waltzing posteriors? Yet Beethoven was obsessed with writing variations and pressed ahead to create the very apotheosis of the variation form. I see it in a way as the splitting of an atom to create entire new worlds of manifold associations and moods, sometimes explosive, on many occasions bucolic and humorous (the parody of the Don Giovanni aria), from time to time contemplative. The work explores the entire gamut of human experience in the transformations of this small fragment. One cannot help but reflect on the analogous cosmic fate of the Arietta theme in his Piano Sonata No 32 in C minor Op. 111. May one draw any significance in these 33 variations as one further final statement, pushing his own boundaries and limits in the face of the isolation of profound deafness. Yet we read he maintained his robust sense of humour to the end.

Anderszewski in this performance has come a long way in musical maturity, philosophical penetration and meditation on this work since performing it at the Leeds International Piano Competition in 1990, his recording in 2000 and the film made of his relationship with the work by Bruno Monsaingeon in 2001. Clearly the pianist has thought long and deeply, his associative emotions  ‘recollected in tranquility’ allowing his profound vision time to grow organically and lodge ever more deeply in his mind and sensibility over the years until the full meaning of this demanding work can communicated to us. A masterpiece formerly considered inaccessible to pianists and audiences alike has been transformed by this pianist into a panorama of the soul. The audience at the Barbican remained perfectly silent throughout, not one slight cough or sound disturbed the collective hypnosis we dwelt under that night.

I would like to quote some lines of William Wordsworth written in 1798 from his poem Lines Composed a Few Miles above Tintern Abbey not so long before this late Beethoven composition. The composer would be dead in 1827, four short years after the  publication of the Variations. These lines perfectly express, in poetic language quite beyond my grasp, the effect on me of this performance that enchanted night, the finest interpretation I have ever heard.
[...]

And I have felt
A presence that disturbs me with the joy
Of elevated thoughts; a sense sublime
Of something far more deeply interfused,
Whose dwelling is the light of setting suns,
And the round ocean and the living air,
And the blue sky, and in the mind of man:
A motion and a spirit, that impels
All thinking things, all objects of all thought,
And rolls through all things. 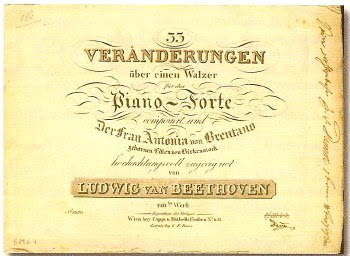