Showing posts from February, 2020
Show All

A Tribute to Fryderyk Chopin, Patron of Warsaw University of Music. PIANO RECITAL by Piotr Paleczny and Karolina Nadolska 22 February 2020 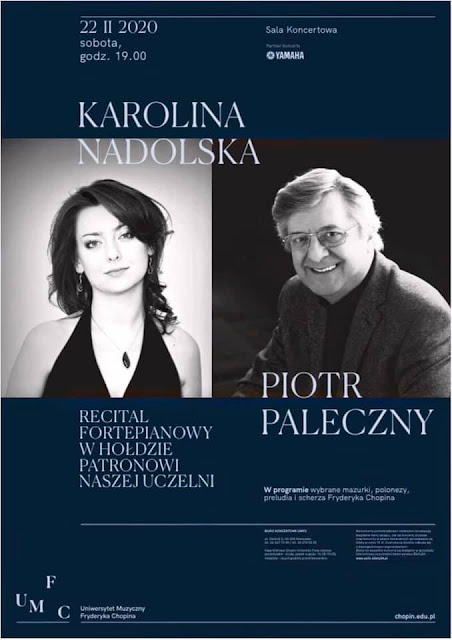 As we slowly approach the birthday of Fryderyk Chopin, the celebratory events begin to appear on the list like a regiment of Polish Hussars on parade. This recital was the first. A cloud hovers over the birth date of Fryderyk in a rather characteristic Polish way. The year 1810 is not seriously in dispute but the Chopin family insisted on March 1 while the baptismal certificate records a birth date of February 22 over which controversy still rages in the minds of some. Celebrations in Warsaw occur throughout the week which neatly covers all possibilities. He was brother to three intelligent and talented sisters. The family moved to Warsaw soon after his birth into an apartment in a wing of the superb Saxon Palace where Mikołaj became a professor at the Warsaw Liceum (High School).   Chopin possesses an unrivaled position as Poland’s national composer and its musical  wieszcz. [1]    His music is the beating heart of the country. The great Polish poet Cyprian Norw
Post a Comment
Read more