August 06, 2020
Friday 22nd February 2019
As usual with jet-lag I awoke early at 5.00 am and prepared for the full day ahead. As you can see from the above photo the view from the restaurant was dramatic. You can see the symbolic Atomic Bomb Dome (Genbaku Dome) in the middle distance. Before the horror that occurred at 8:15:17 a.m. local time on 6 August 1945 when the cruelly named 'Little Boy' was delivered, the building was known as the Hiroshima Prefectural Industrial Promotion Hall. 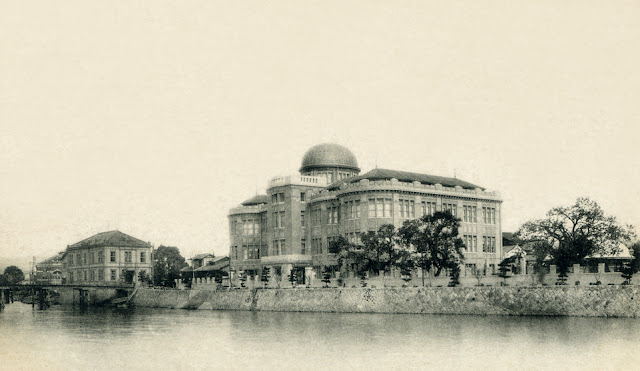 Before the bomb, the Hiroshima Prefectural Industrial Promotion Hall 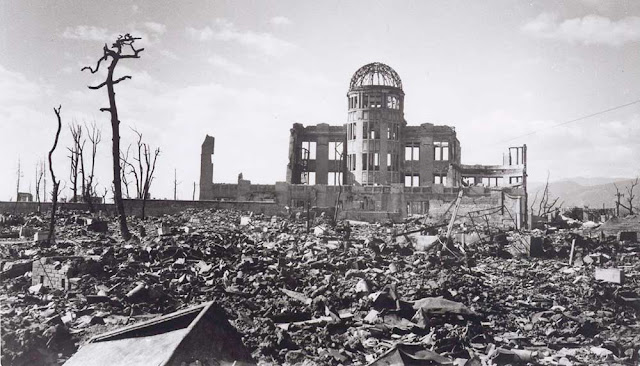 Music for Peace in Hiroshima 2020

We were shown a remarkably moving and emotional video entitled The Piano That Loved Chopin concerning a venerated object known as Akiko's Piano. It featured diary entries made by a young girl Akiko and interviews connected with those connected to the piano. At this point I would like to interpolate a programme note from the Japanese composer Dai Fujikura who today will 'touch this instrument' for the first time (clearly considered sacred in Hiroshima). When discovered, the unplayable  piano was expertly restored by the 'Piano Doctor' Hiroshi Sakaibara

Akiko's Piano - Piano Concerto No.4
This special piano concerto was written for the pianist Martha Argerich (her appearance cancelled due to the pandemic).
https://www.youtube.com/watch?v=nY_mBJCaBWM
Then why it is called “Akiko’s Piano”? Who is Akiko?
In Hiroshima, there is a piano which survived the atomic bomb, the smashed glass window from the blast is still stuck to the piano’s body. This piano belonged to a 19 year old girl, Akiko.

Akiko was born in LA to Japanese parents. There was a strong friendship, especially in LA, between the Americans and Japanese people before the Second World War.

Akiko got the piano when she was still in America, this piano is also American, Baldwin, made in Cincinnati. When Akiko was 7, she and her parents moved to Japan, to live in Hiroshima.

She kept practicing the piano, having lessons, and when she was 19 year old, while she was working as a mobilized student, the atomic bomb was dropped. She walked and swam as the bridge had already been destroyed, to her home where her parents were that day. Then, the next day, she died in her parents’ arms. Her parents cremated their daughter’s body under a big persimmon tree which still exists today. Her last words were “Mom, I want to have a red tomato.”

Though naturally this concerto will have “music for peace” as its main message, as a composer I like to concentrate on the personal point of view. This microscopic view to tell the universal subject, is the way to go, I feel, in my compositions : the view of Akiko's, ordinary 19 year old girl who didn’t have any power over politics (and she was born in US, which means she was also an American) At the time of her death, she didn’t know what had happened, or what killed her (radiation poisoning, as she didn’t die from the initial blast).

There must be similar stories to that of this 19 year old girl in every war in history and in every country in the world. Every war will have had an “Akiko”.

I am using two pianos in this concerto, one is the main grand piano, then, the cadenza part of this concerto, perhaps at the end of the concerto, Akiko’s Piano, the piano that survived the atomic bomb will be used, played by the soloist.

To express such an universal theme of “music for peace”, the piece should portray that most personal, smallest point of view. I think that is the most powerful way, and only music can achieve this. 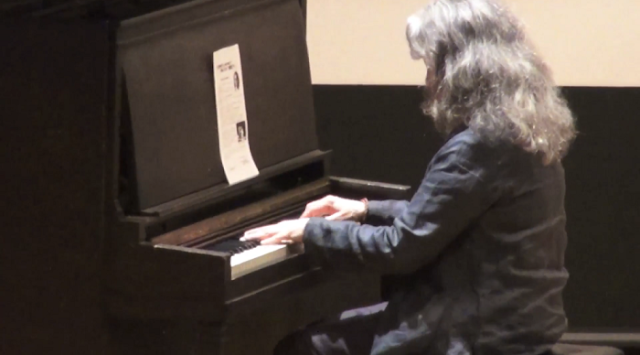 Martha Argerich playing Akiko's Piano. The great Argentinian pianist and winner of the International Chopin Competition in 1965 appeared with the Hiroshima Symphony Orchestra for 'An Evening of Peace Concert' on August 5, 2015. Two days later, she visited Chugoku Denryoku Hall and played Akiko’s piano.

“I think the piano loves to play Chopin, strangely enough. Apparently, the girl, Akiko, she used to love Chopin and play Chopin. Maybe the piano has the memory of this.”
HSO also performed the same peace program at Suntory Hall in Tokyo for the first time which was graced by the presence of Their Majesties the Emperor and Empress of Japan. She was subsequently appointed a Peace and Music Ambassador of the Hiroshima Symphony Orchestra.
We were then invited to comment on this desperately moving video made by students themselves by their own broadcasting club. The renowned pianist Peter Serkin has made a fine CD that he quite spontaneously recorded when first encountering this 100 year old instrument. The sound is reminiscent of a Pleyel pianino of the nineteenth century but was manufactured by the American Baldwin company of Cincinnati.
The video can be viewed here:
https://www.youtube.com/watch?v=exp6kluj070
For the full account of my spiritually uplifting and marvelous musical visit to Hiroshima in February 2019
http://www.michael-moran.com/2019/02/music-for-peace-project-hiroshima.html
During the 2019 Chopin i jego Europa Festival (Chopin and His Europe Festival) in Warsaw 14 August - 1 September 2019 there were two outstanding concerts with the Hiroshima Symphony Orchestra in this Music for Peace series
http://www.michael-moran.com/2019/07/chopin-and-his-europe-chopin-i-jego.html