I have many fond memories of this now magnificently restored historic Warsaw Lutheran church and am quite taken by the connections with Chopin here as a young boy of 15.

The king's banker, Piotr Tepper, made frustrating efforts to build this church but in 1777 he finally obtained the appropriate privilege from King Stanisław August Poniatowski. The king, however, reserved for himself the right of choosing the design of the building. The church was designed by Szymon Bogumił Zug and constructed from 1777–1782 with a monumental dome and lantern. On 30 December 1781 the congregation's pastor Gottlieb Ringeltaube [de] celebrated the inauguration of the church.

It is a Classical rotunda based partly on the Roman Pantheon. The Lutheran church was the highest and at the same time one of the biggest buildings of 18th century Warsaw. The diameter of the dome is 33.4 meters and the height 58 meters. The church fell into ruin when bombed and burnt by the Germans on September 16, 1939. It was rebuilt after the war. The church continues to dominate the surrounding buildings.

In April 1825, Tsar Alexander I came to Warsaw to open the third Sejm (Parliament) as King of Poland. It was decided that Chopin, as 'the foremost pianist in the town', should give a recital for the Tsar in the Holy Trinity Church, Warsaw (Kościół Ewangelicko-Augsburski Świętej Trójcy) on a curious new instrument known as the Aelomelodikon, designed by Professor Jakub Hoffmann and constructed by Fidelis Brunner. This combination of piano and organ pipes could imitate an orchestra of eighty musicians.

The instrument could possibly have been inspired by a similar combination harpsichord and organ invented in the 16th century known as a claviorganum - Bull, Byrd and Gibbons composed for it and Gustav Leonhardt made a fascinating and successful  recording on a copy (Alpha 042). At all events, Chopin was so successful in this recital and his brilliant improvisations, Tsar Alexander gave him and Brunner a diamond ring each! Needless to say the instrument was stillborn and disappeared.

In the socially transitional early 1990s some extraordinarily rare musical works were performed in Warsaw, such was the nationalist excitement following liberation in 1989. This has developed into a veritable Polish Musical Renaissance in 2021. I experienced some of these performances.

Chopin's second teacher, the neglected Silesian composer Józef Elsner (1769–1854), one of the seminal figures in Polish music, taught him advanced composition, harmony and counterpoint. Chopin was to become  the greatest  master  of counterpoint since Mozart.

Elsner was  not  a frail  little  man  living  in  a grubby  Warsaw  tenement. He founded the Warsaw Conservatorium. Besides symphonies, piano works, quartets,  cantatas and a number of masses, Elsner wrote thirty Polish operas and two ballets. An orchestral precursor to Verdi of great musical imagination,  Elsner introduced Chopin to the art of bel canto song. Chopin’s early love for the beautiful singer Konstancja Gładkowska flowered alongside his love of the voice, which later developed into a passion for Italian opera, in particular  Bellini and Rossini.

Elsner constantly pressed Chopin to compose  a ‘patriotic  opera’ but failed despite the composer’s enthusiasm  for this art. Józef Elsner’s great work,  the extraordinary Passio Domini  Nostri Jesu Christi, is scored for large forces of musicians including 14 solo voices, three 4-voice choirs, a piano and orchestra, military band and an enlarged percussion  section. The autograph of the piece was discovered  in the Berlin State Library.  ‘The Death  of Christ’  and ‘The Earthquake’ are composed in a particularly impressive Sturm  und Drang style.

The first complete  modern  performance was given in March 1999 in the Neoclassical  centrally-planned Lutheran Church in Warsaw  by  Warszawska  Opera  Kameralna (Warsaw Chamber Opera). The work had an overwhelming impact on me during this performance and increased my respect for Elsner enormously! Elsner was ‘permitted’ to dedicate the work to Tsar Nicholas I who was at that time King of Poland.

In 1773 Mozart  was asked to supply  the incidental music to the play Thamos, König in Ägypten  (Thamos, King of Egypt) by Tobias Philipp Baron von Gebler. The play deals with the Masonic conflict between light and darkness.

At Łazienki Park at the Theatre on the Island, in the early 1990s, the Warsaw Chamber Opera, as part of the astounding Mozart Festival, created a staged version of Thamos fused with the music of two later Masonic cantatas. During this festival, the company mounted all twenty-one operatic works of Mozart. The experience of Thamos in the park has remained one of the greatest of my entire musical life.

Shortly before midnight fluttering  funeral candles were lit along the sinuous  paths  leading to the theatre  from  the entrance  to the park. The orchestral pit lies before a strip of water which isolates the Theatre on the Island (inspired by the ruins of the Temple of Jove at Baalbek in Syria), where the actors perform, from the amphitheater (modeled on ruins at Herculaneum) where the audience is seated. Trees were silhouetted against a fading summer sky and the leaves rustled  in the light breeze moving over the shattered  columns  and pediments, the lake a dull mirror reflecting statues of the dying Gaul and Cleopatra. Together with the cry of peacocks on the balustrades of the palace, one was lifted onto a plane of rare classical beauty.

On one occasion it rained heavily and the entire musical side of the production was transferred to the Holy Trinity Church, Warsaw (Kościół Ewangelicko-Augsburski Świętej Trójcy). Incredibly the church was opened up at 12 midnight and the performance continued until 2.00am. Something unheard of in a city like London! The Artistic Director of the day Stefan Sutkowski, was a musical institution himself with enormous influence in the world of musical culture in Warsaw.

Photographs below by Filip Błażejowski

This charming concert was part of the Belgian Days 2021 organised by the Embassy and in the presence of HE the Ambassador of Belgium to Poland Mr. Luc Jacobs.

The program was devoted to original compositions and arrangements by the Belgian composer Piet Swerts on the piano and the Ataneres String Ensemble formed in 2017. The ensemble performs works in a wide range of modern and classical genres. They have won many awards under the Artistic Direction of Wim Spaepen.

Swerts is very active internationally as a composer and since 1985 has been conducting and composing exclusively in all genres. He has written more than six piano concertos, a violin concerto, five major oratorios, three symphonies, two operas and a great deal of chamber music as well as iconic pieces for saxophone. He also teaches composition and orchestration. 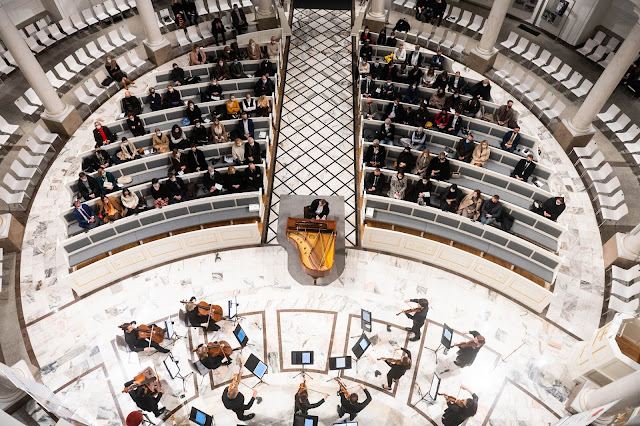 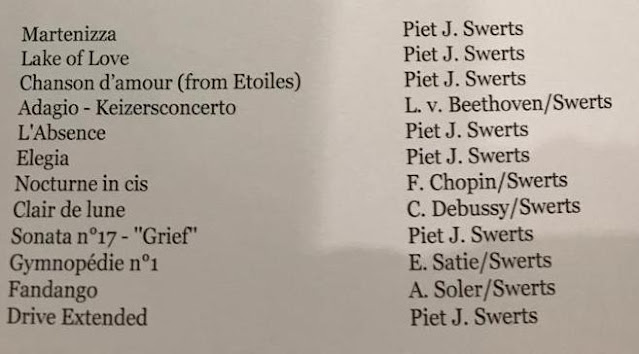 I must admit it was pleasant to hear compositions in diatonic harmony from a contemporary composer!
The Martinezza had a stirring, almost military exuberance. I found the Lake of Love (a touching title) and the Chanson d'amour possessed of great romantic charm that made no great demands on dark nights of the soul which was so relaxing. I believe it was intended as a film music composition.
The arrangement of the Adagio from the Emperor Concerto by Beethoven was deeply affecting in light of present tragic situations (the past and currently worsening pandemic in Europe and now Belgium especially). The fine intonation of the Ataneres Ensemble was most evident here. The piece L'Absence adopted far more harmonically abstract transitions to create the feeling of absence of a loved one. The Elegia was not accompanied on the piano which heightened the melancholy of the fine strings, particularly the cellos, bass and viola. 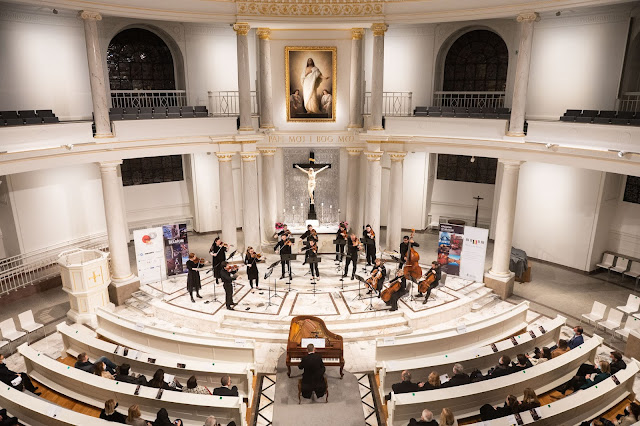 The arrangement of the Chopin Nocturne in C sharp minor Lento con gran espressione was suddenly deeply familiar music (especially the immortal melancholy of the theme on viola). I am always surprised that Chopin wrote this work at a relatively young age, yet the melody of the work is full of intense intimations of deepest disillusionment. Similarly moving was the sublime melody of Debussy's Clair de Lune arranged for strings and piano. The Sonata No.17 Grief  was what one might term 'sweetly dark', never falling into the deepest despair, which we strive to avoid if at all possible in reversed circumstances in life.

The Eric Satie Gymnopedie No.1 was just as charming here as whenever I hear it - immortal simplicity in this melody. The music of Eric Satie has had a rather unacknowledged influence on French music. A wonderful eccentric was Satie, who had an obsessive desire to collect umbrellas! He had hundreds of them.

The Antonio Soler Fandango lifted our spirits, but I suggest you hear the full long version on the harpsichord. It is a phenomenal and magnificent work on the instrument for which it was intended. Try the exuberant Variaciones Del Fandango Espanol on Teldec played by Andreas Staier. The final work Drive Extended was a similarly energetic work to round of an evening of  reflective music played with exemplary style and professionalism.

Perhaps needless to say, a standing ovation concluded the concert. 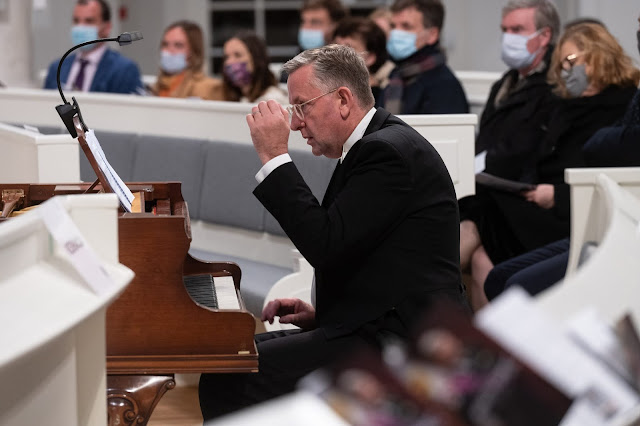 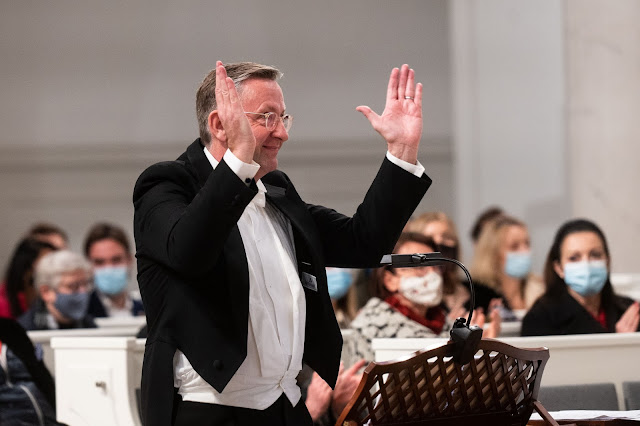 At the conclusion of the concert we were ushered outside into the freezing Warsaw night to sample hot Belgian chocolate to drink and delicious waffles. Rather a unique and festive conclusion to a Polish classical concert. Most welcome as autumn inevitably slides into winter. 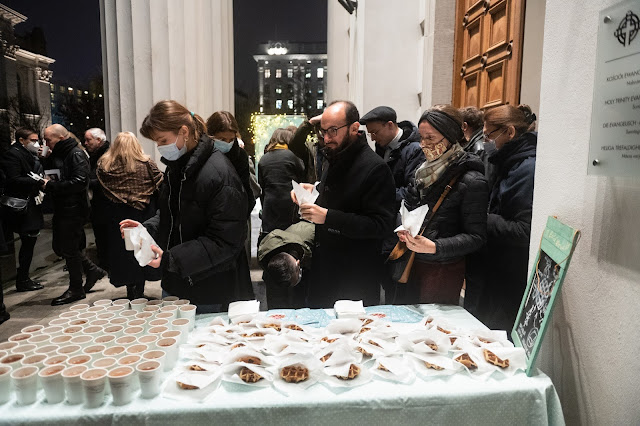