Italian opera tended to dominate the English stage when Henry Purcell (1659-1695), wrote the opera Dido & Aeneas (1688) with a libretto astonishingly in English by the Irish poet Nahum Tate who had often written for Purcell. The score was collected in the famed Orpheus Britannicus and is arguably the first English opera. The plot is certainly tragic but this does not exclude the presence of lighter elements, possibly with ironical meaning.

The story is based on Book IV of Virgil's Aeneid. It tells, with various imaginative metaphysical interpolations, of the passionate love of Dido, Queen of Carthage for the Trojan warrior and heroic figure Aeneas and depicts her formidable despair and death when he abandons her for a 'higher purpose' ordered by the Gods.

When one is confronted in modern times with a great work of operatic art some 350 years old, it is irresistibly tempting to stage it in a readily understandable and relatable modern metaphorical guise. This may well dilute or at the least alter, the essentially tragic and possibly temporally inaccessible nature of any older work. The music remains close to timeless and immortal but not so the visual decisions that need to be accomplished in the staging of the work.

Tomasz Cyz the Stage Director and  costume/scenographic designer Natalia Kitamikado evolved the imaginative idea of relating the plot of the opera and its appearance partly to the topical contemporary destiny of H.M.Queen Elizabeth II, she and her entourage dressed in female fashions of the 1950s. She was certainly a tragic figure seated alone in black, utterly isolated, at the Duke of Edinburgh's funeral. Aeneas was presented as an image of an English naval officer, loosely associated with Philip, the Duke of Edinburgh. Thus were we placed directly among the renowned royalty of modern times. The added prologue with its condemnation of the cruelty of war set the dark tone of contemporary life and interpretation of the tragedy that was to evolve in the opera.

The Musicae Antiquae Collegium Varsoviense, under the Belgian conductor Dirk Vermeulen, gave an indication of the coming fine musical performance in the excellently gauged contrasting moods of the Overture.

The voices and orchestra were fine and carried the opera with significant and usually sufficient emotional involvement. Dido's intense coup de foudre on first catching sight of Aeneas (a richly voiced Artur Janda) and the galvanic Restoration passion that erupted between them could perhaps have been made more explicit in this modern context. But then they are modern royals and not given to overt sensual display except rarely and if so, almost always scandalously.

The placement of the 'otherworldly' scenes in a modern context tended to give rise  to significant staging challenges. The metaphysical elements and evil machinations of the sorceress and witches (enchantresses), in addition to the directives given to Aeneas by the Gods Mercury and Jove, required some suspension of disbelief. With imagination and suggestion this was never an obstacle.

The storm did not demolish us or them with fear and destruction ('Rending those fair Groves asunder'). I was also rather unsure of the sufficient depth of tragic seriousness of the golfing ('Behold, upon my bending spear') and pic-nic metaphor of the staging at times.

The 'boozy sailors' were entertaining but the perceptive moral  irony of

And silence their mourning

With vows of returning

But never intending to visit them more.

was rather lost in drunken antics. However, it lifted the mood away from the darker passions. 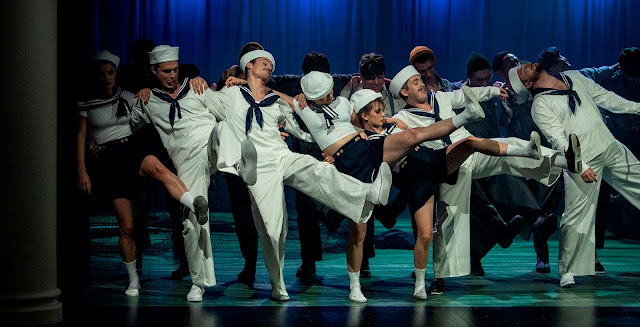 The contemporary relevance of the CHORUS (the fine Vocal Ensemble of the Warsaw Chamber Opera) together with DIDO singing of betrayal, duplicity, mendacity and destruction was not lost on this watcher at the present bonfire of the vanities now taking place so close to his home.

Thus on the fatal Banks of Nile,

Make heaven and Gods the authors of the Fact

The greatness of the concentrated economy of this magnificent music by Purcell and depth of poetic analysis of life by Tate often swept all my visual reservations of the production far away.

Pursue thy conquest, Love; her eyes
Confess the flame her tongue denies

The most famous aria in opera was movingly sung by Margarita Slepakova. It is impossible for me not to associate in my inner ear the desperately tragic Janet Baker in this aria. The music and poetry carry you with immanent force, if ever so briefly, into the inescapable arms of final dissolution.

Thy hand, Belinda, darkness shades me,
On thy bosom let me rest,
More I would, but Death invades me;
Death is now a welcome guest.

A thought provoking, contemporary production of an immortal, universal masterpiece that speaks of the tensions between ungoverned passion, duty and sacrifice directly to the heart, a work that surely cannot be heard and experienced too often in one's all too brief life.