Eccentric Club Dinner at the Savile Club, 69 Brook Street, Mayfair on the evening of 21 March 2012 in the presence of H.R.H. the Prince Philip 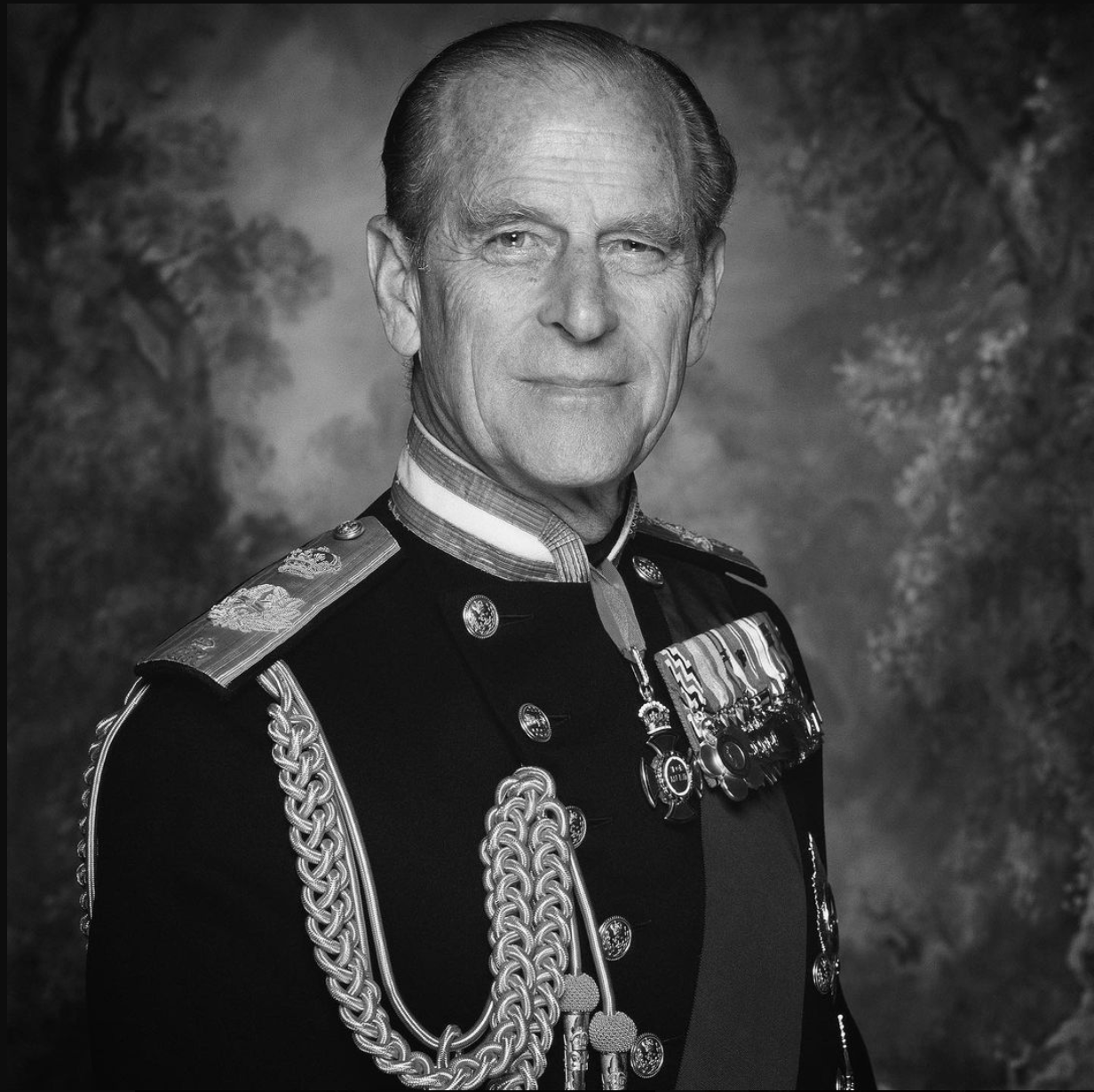 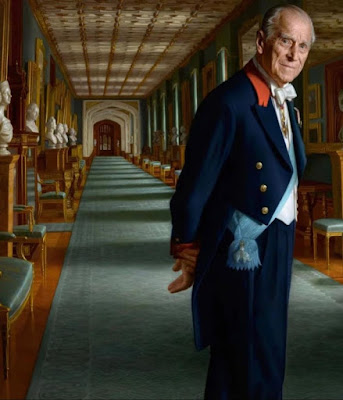 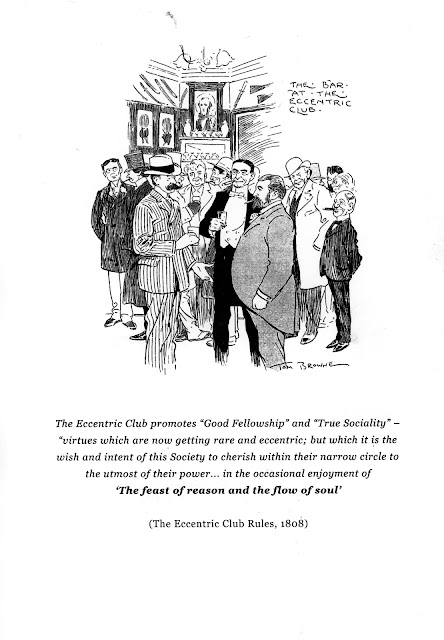 Pretentious moi? Probably but it's fun in its own way. One only lives once and the standards one was brought up with should be maintained as one ages. I cling desperately to the coat-tails of the 'inequality onslaught' as my once comfortable income is unpleasantly reduced by the recession and the financial chaos in Europe. The oligarchs rise inexorably in a triumph of mediocrity. I also fight a thankless task against the frightful levelling of 'political correctness'. This club and the art of individualist and fearless conversation it maintains helps somewhat to foster a normal sense of human proportion, humour and morality. 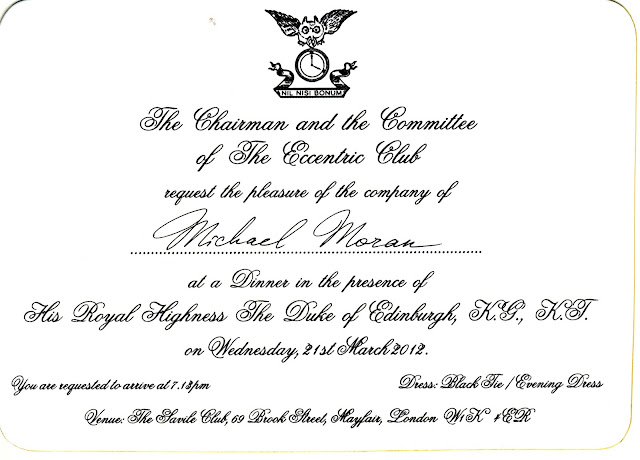 
I made a special trip to London from Warsaw for this entertaining event and was so pleased I did so. The venue was the Savile Club at 69 Brook Street London W.1 once owned by Viscountess Harcourt. The club occupies one of the greatest original Mayfair interiors. Here the subject of my recent biography in progress, my great-uncle Edward Cahill and his musical partner George Brooke, played for Queen Mary and other distinguished guests on 1 July 1924. The Queen had not been 'out to dinner' for many years. Edward was mentioned in the Court Circular concerning this recital and so it became the astonishing beginning of his glittering London career.

By some extraordinary serendipity I had dinner in this very same house, probably very same room, as 'Uncle Eddie'. This was with the Eccentric Club patron and royal of my own day, H.R.H. The Prince Philip, Duke of Edinburgh, together with Lord Bath and Lord Montagu of Beaulieu and about 60 fellow members of the Eccentric Club. An absolutely extraordinary coincidence 88 years later. We ate in the opulent former Ballroom, surely the most outstanding survival in a private London house. The Ball in the Fourth Series of Downton Abbey was filmed here. The silver and blue colour scheme was based on that of the vastly more ornate yet exquisite Amalienburg, a small mansion pavilion de plaisance in the gardens of the Nymphenburg Palace in Munich. Oddly enough I had visited this palace last summer and think it deserves a detailed representation here, although not 'strictly to subject'.


The choice of sartorial accoutrements is vital at such an event. Understandably wishing to appear 'individual' and at least a little 'eccentric' one treads a fine line between the dullness of unadorned Black Tie and the exhibitionist nature of Union Jacks and lurid ties that revolve.

I decidedly wished to avoid any comments passed on me reminiscent of one evening at the historic George Inn at Southwark when I was drinking at the bar dressed in a black Naval jacket with brass buttons, gold coronet and sporting a tie with Davidoff cigar motif. An inebriated specimen, a master of the elegantly turned phrase, leaned over and far too close to my face vilely uttered in mellifluous Cockney

'Good Lord! Steady on.' was my inadequate reply.

I certainly wanted to avoid that sort of thing, one does, although it would be highly unlikely among gentlemen of this club.

I had brought from Warsaw my absolutely correct single-breasted, peaked lapel dinner suit (one button closure) tailored by Ede and Ravenscroft of Chancery Lane and Savile Row, trousers held aloft by their beautiful black silk Moire braces with braided loops. The less expensive notched lapel dinner suit with two button closure is not really on to my mind. Shawl collar is fine for relaxed Black Tie events. Marcella formal shirt with conventional collar, avoiding like the plague the (inappropriate for Black Tie) winged variety. Barathea self-tie bow tie, again avoiding the made up model lest I be blackballed from the club. Onyx and gold studs and links.

My single eccentric gesture was to wear my deep green velvet waistcoat with gold embroidered Imperial Napoleonic bees, an item I fell in love with instantly sometime, somewhere in the St. James's bazaars and which cost a fabulous amount at the time.

In some trepidation, as I had been warned of their fragility, I also ordered a Gardenia boutonniere from a florist (Paul Thomas Flowers) in Mayfair. The correct preparation of this superb flower for a buttonhole, cut directly from the potted plant, was a fascinating and complex technical exercise to witness. No pocket handkerchief if one wears a boutonniere.   Owl and clock badge of the club (similar to that on the dinner menu) fixed to the other lapel. Patent leather court shoes by Church and calf-length New and Lingwood evening socks completed my outfit. At the dinner I received only effusive compliments on my waistcoat thank goodness.

The invitation requested that one arrive at the eccentric hour of 7.13pm. I think Lord Bath and myself were the only members who actually observed this directive as we arrived at Brook Street simultaneously at that exact time.

Rather than rabbit on about the food let me just say it was excellent, clearly from the finest sourced ingredients and perfectly cooked. To produce around 80 beautifully pink and hot Saddle of Lamb at the one time requires a chef and  kitchen organisation of no mean order. The menu was chosen by H.R.H. The Prince Philip himself and reflects English cultural preferences concerning food at their finest and most traditional, reminiscent of many other famous Eccentric Club Dinners. Piper-Heidsieck champagne was served from the moment of arrival and throughout the meal in addition to other carefully chosen table wines. 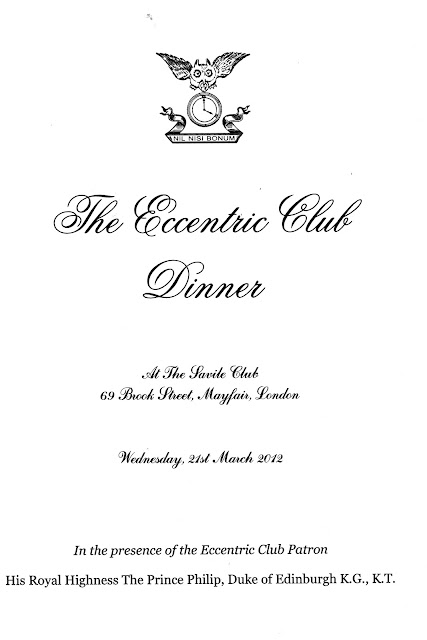 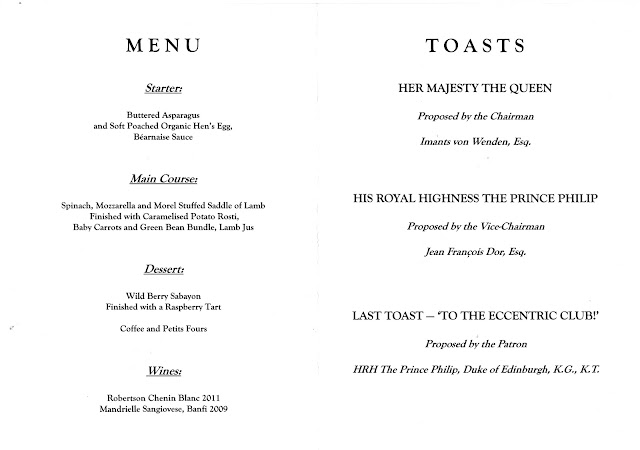 A wonderful, convivial evening meeting with old and making many new friends. I was one of the last to leave the Savile Club Bar at 1.30am.

Nil Nisi Bonum runs the motto of the club Nothing But Good.

Heartily observed on this night.

Note on Imperial Napoleonic bees:
A symbol of immortality and resurrection, the bee was chosen so as to link the new dynasty to the very origins of France. Golden bees (in fact, cicadas) were discovered in 1653 in Tournai in the tomb of Childeric I, founder in 457 of the Merovingian dynasty and father of Clovis. They were considered as the oldest emblem of the sovereigns of France. ﻿﻿

For an account of the dinner with H.R.H. the Prince Philip in February 2010 at the 'old' Arts Club

http://www.michael-moran.com/2010/03/eccentric-club-dinner-17th-february.html
My biography of the fascinatingly glamorous life of Edward Cahill (1885-1975), my pianist great-uncle, was published in 2016 and includes a detailed description of the concert given for Queen Mary in this room.
I noticed recently that the concert is mentioned in an entry for Tuesday 1st. July 1924 in the new edition of the 'Chips' Channon Diaries p. 117 edited by Simon Heffer (London 2021)
'Chips' attended this 'tiny and charming party' given by Lady Harcourt.
He wrote:
'Arrived in London at eight and hurriedly got into knee breeches for a small musical party at Lady Harcourt's, to meet the Queen ...The Queen was very affable and talked to everyone. She was dressed in pink and wore a star tiara...' 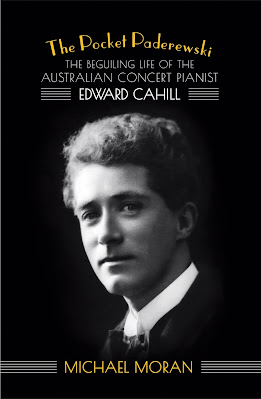