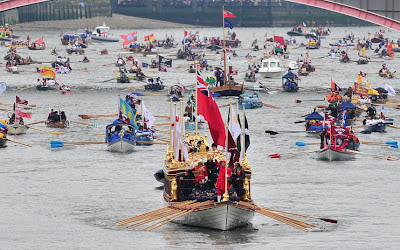 Living as I do in a variety of self-imposed exile, I had originally planned to go to London for these few days of celebration of the Diamond Jubilee. A few months ago I was already unable to obtain accommodation at the wonderful time-warp  Royal Overseas League in St James's where I usually stay and was placed on a waiting list. Finally deciding not to go (any London break always ends up costing me at least 1000 pounds) I arranged other pressing personal matters and then was suddenly offered accommodation - too late - but how nice of the ROSL to offer.

When I lived in Marylebone I used to carry my aluminium ladder down to the Mall early in the morning on every Royal occasion for 30 years until 2004 when I moved to Warsaw. At the wedding of Charles and Diana I asked a little girl standing with her mother nearby who she would like to be after the glittering procession had passed. 'I would like to be a horse!' she replied with great concentration. You have to actually be there to experience such glorious comments.

On this occasion I was sadly not present on the banks of the Thames and was restricted to the BBC coverage by BBC World (BBC One). You have no need for me to underscore the achievement of this glorious event and the quite stupendous personal, organisational, theatrical, and financial skills behind it. The Queen, the Prince Phillip and the institution of the monarchy deserved every moment. Their sheer physical stamina standing for the long hours of the pageant and in such inclement weather, wind and rain, was remarkable for people of their age. Of course the Prince is a naval man but let us hope there are no health repercussions from this demanding jubilee campaign...

Throughout, the  vital importance of the maintenance of the historical continuity of the monarchy and country was clearly evident. Can you actually separate them in Britain? To be fully alive in the present, our past must hover in the background of all our lives. In the framework of geological time all human activities are contemporaneous. Watching this event I was reminded of a remark once made by the much maligned  parlimenatarian Enoch Powell : 'Nations as much as individuals live largely in their imagination.' We are none the worse for the fierce nostalgia that takes hold of the British spirit at moments like these.

What a pity the BBC commentary was so puerile and lacking in gravitas. I had prepared a festive English pic-nic lunch for an English friend and two Polish ladies who may certainly be considered honorary Brits. Excellent wine from Berry Bros & Rudd to accompany the food, chilled semi-dry Russian champagne to accompany the cakes and to conclude Kibo Chagga coffee from H.R. Higgins (Coffee-man) of Duke Street with a balloon of Berrys XO Armagnac. Raises the gloom of contemporary despond.

However on occasion I was forced to turn to my friend in amazement as the waves of vacuous, vapid, asinine and fatuous commentary washed over us. The celebrity presenters had clearly done minimal or no serious research, historical or contemporary, on any aspect of the pageant and relied on the shallow mine of their frivolous personalities for material. The mindless celebrity show virus now infects descriptions of our most sacred institutions.  We were patronised like children. Infantilism.

"The rowers are a remarkable conjunction of the muscles of the back, arms and legs in human form." commented one inspired individual.  "The Royal barge is moving forward." Good to hear. If anyone was identified and singled out for attention the sole comment was  "A great day for him..." and 'a great day' for any other living creature or any of the multifarious  'iconic' moments or vessels mentioned.  'Tower Bridge is about as iconic as it gets.' was a high point of commentary. Penetrating stuff. Scarcely any information was provided in any detail of the type or provenance of boats ('a weighty ship' says precisely nothing - so many of the Dunkirk 'little ships' possess fascinating and valiant histories; the vintage steam vessels interesting constructional details). The people on them were largely ignored (also often heroic and possessing considerable personal stories and significant social achievements). The picturesque historic Thames riverscape through which they were passing was also ignored, a major descriptive lack for the millions watching abroad who have never seen the Thames in London.

This broadcast was going out to a world largely unfamiliar with the significance of what they were seeing except that it 'looked very expensive'. We cried with one voice 'Where are David and Jonathan Dimbleby, both among our finest and suitably serious BBC presenters  of Royal events?' John Simpson, Nicholas Witchell, Nick Robinson..?

How very distant now the sensibility,  rich voice, gravity and uplifting informed content of a Richard Dimbleby...At the scarcely credible ignorance of the announcement of 'H.R.H. The Queen' I switched off the sound and we gave our own commentary to our lovely Poles as best we could with the unavoidable interruptions of trivial  'features' - the singing Cornish trawlermen were brilliant though in close harmony.

Television presenters are frightful egomaniacs in the main, pace professional journalists such as Andrew Marr or Dan Cruikshank who possesses some standard of literacy, individuality and cultural seriousness. A low water mark at the BBC.

Whoever chose this crew of skaters? A base day for them.