Daniil Trifonov with Valery Gergiev and the Mariinsky Orchestra CD 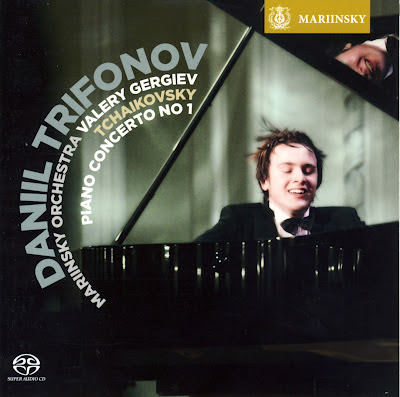 It was one of those wonderful Warsaw September evenings. May, September and if we are fortunate a golden October are really the most beautiful months in Poland - balmy still and sun-kissed, autumn just brushing the trees with gold, the softest of air as the day draws to a close. Zosia had prepared  a kurki (chanterelle) dish with potatoes, onion and boczek (bacon). We sat on the terrace overlooking the lake and watched the gliders drifting in the blue above Bemowo among high feathery clouds sipping an excellent claret as dusk settled over the land. At the conclusion of the meal and the mint chocolate ice-cream, I had a black Sumatran coffee, a balloon of armagnac and a  Cuban cigar. It was only then, properly prepared and after I had lit the storm lantern, that I put on the recording above.

I am speechless with admiration. I will only say this about Trifonov - buy this recording as soon as you are able. Anyone who reads my blog knows the adoration in which I hold this pianist since I first heard him in the Chopin Competition in Warsaw in 2010. He has an intensity of passionate emotional communication of the creation of music as an art, as a kabbalistic craft, greater than any young pianist I know. A magician of the instrument. The Tchaikovsky concerto has fantastic drive and elan in the outer movements with an Andante semplice of deepest yearning.

The Chopin Barcarolle  is one of the finest of recorded performances - no crashing chord, no boating accident to begin the love song on the Venetian lagoon (my bete noir - most pianists, even some of the greatest, have no idea how to begin this deeply impressionistic work that to me is like a Turner watercolour of the floating city). He presents us with a truly romantic love excursion, a seascape of fluctuating emotions, a love song  building to an ecstacy of passion subsiding at the close - as it should be.

The Liszt/Schubert transcriptions are marvellously atmospheric and plumb the depths. The Erlkonig  is as terrifying as the legend, Die Forelle as joyful as the mountain stream where the glorious fish leaps. The Schumann/Liszt Liebeslied (Widmung) reduced me to tears with its rhapsodic conclusion that opened like a panoramic embrace.

Trifonov has this extraordinary abilty to communicate, to touch the heart and move one emotionally, a divine quality given to so few artists. It is a gift of God made up of innumerable microscopic hesitations and accelerations, indeterminate fluctuations of dynamic and phrasing, subtle variations of articulation, a wide palette of colours and nuance, a tone and touch that emerge organically from within the soul. Such profoun d and refined musical gestures are instinctive and cannot be learned.

No sensationalist imitations of sensibility or emotion are here - all is real. His own character, the ability to sustain  a passion to explore music and maintain his formidable technique, the experience of life itself will now determine his further musical development. Pray he remains the true artist he is  in a world that bows before celebrity and the golden calf.

'He has everything and more. What he does with his hands is technically incredible. It's also his touch – he has tenderness and also the demonic element, I have never heard anything like that'   Martha Argerich

'Trifonov’s recital was breathtaking. Argerich last year told the FT she had never before heard a touch like his, and all I can do is concur: it’s not just a matter of precision and weighting, it’s a unique amalgam of fastidious tenderness and seemingly unfettered wildness. After two exquisite Debussy Images, he gave an account of Chopin’s complete Etudes that was truly revelatory: his emotional restraint – and frugality with the pedal – made the lyrical ones all the more moving, while his preternatural dexterity lent the finger-twisters a rare grace. For the next three weeks, anyone interested can check out this astonishing recital for free on www.medici.tv.' Financial Times (UK)

A wonderful evening that gladdened my spiritual heart and made me proud to be human. A rare enough experience...