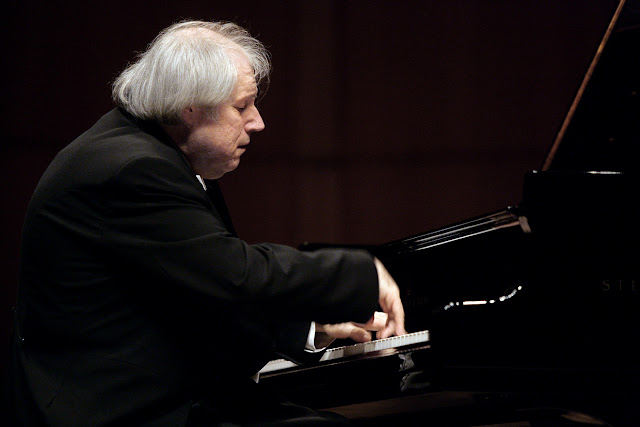 This morning I try to write the account of a musical evening engraved indelibly on my heart and mind. Those of you who read my extensive notes know I can usually write quite rationally about music but this morning....I am still vibrating with what was presented to us...

How can words describe the overwhelming, profound experience of this great musical soul revealing itself....

All the Mozart was played far slower and at a more meditative tempo particularly K 457. Here was a thinking and deeply introspective, even philosophical Mozart. Ornamentation and inner details revealed as never before. The  C-minor Fantasia emerged as an improvisation of thought, searching for, touching upon harmonies and shifting emotions as an opaque sun is intermittently revealed from behind rushing winter clouds. Eloquent and touching with a curious, misty autumnal air perhaps not appreciated by everyone in Mozart.

The Schumann....ah...that the two works would be linked as the presentation of the anguish of frustrated but not unrequited love was so clear from the outset in the Arabeske. The father of Clara Wieck, with whom the composer was deeply in love, violently opposed what he saw as an obstacle to his daughter's pianistic career. He disapproved of Schumann as a possible son-in-law.

Sokolov played the Arabeske with intense, penetrating lyricism and heart-breaking poignancy as we moved toward his towering presentation of the Fantasy in C major. What can I say that is meaningful about this deep soliloquy on the nature of love and its lyrical poetic heights and flights of ecstasy, the warmest of love's emotions, the  haunting crevasses, the proud grandeur of overcoming....Perhaps it inflames the intensity of the response if you are in a similar emotional turmoil to Schumann or remember such a situation in your own life. Tears drawn from me by the deepest introspection. I am still trembling with the emotion of this musical experience and can write meaningfully no further about it, nor ever wish to do so. An unrepeatable, visionary moment. Music imbued with its ancient, magical power. Forgive me.

The many generous Schubert encores were equally moving as was the Chopin mazurka. He is very generous with encores - usually a minimum of six. An audience that had remained almost perfectly silent throughout erupted into tumultuous applause, cheers, standing ovations and general pandemonium.

Idly browsing my posts I discovered this review I wrote of a recital Sokolov gave almost exactly two years ago in Warsaw. It serves as an interesting comparison. Clearly nothing has changed for me. I let you read it as I was clearly in a more compos mentis condition when I wrote it, although some of the observations and even vocabulary are identical. 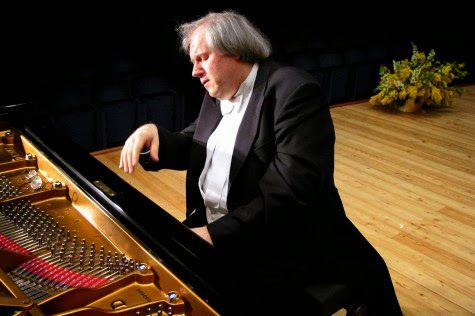 Strangely I go to few concerts in Warsaw these days. The reason became perfectly clear last night. As Thomas Mann said in Dr. Faustus 'Music is a cabbalistic craft.' The problem is that few musicians touch the soul with arcane magic, the spiritual source of all music as in the manner of this evening. I felt the entire programme was perhaps overshadowed, possibly even inspired, by reflections and elegiac thoughts on the recent death of the pianist's wife. Fanciful? Possibly. Certainly there was nothing 'interpretatively standard', no obeisance made towards the conventional in this recital. The utterance was of a creative artist.

Sokolov is what Russians call 'a soul' and this became evident from the opening note of his recital. The tempo he adopted throughout was rather moderate for those accustomed to a sparkling, energetic Bach. For me this was all to the good in the Bach Partita in B major BMV 825 (1726). I play the harpsichord and many feel such works should only be performed on this instrument. Such a consideration is utterly superficial and superfluous when you hear a musician such as Sokolov transform the work on the piano. Every note, every detail of the rich polyphony was in evidence at this moderate tempo. He extracts so much music from the implications within the score. He added some extra notes here and there which was quite in keeping with baroque performance practice. Bach tells us nothing except what notes to play not how to play them. This is the genius of Sokolov. He deeply considers the dynamic, articulation, phrasing, tone, touch, pedalling (a touch here and there), structure in fact everything he perceives musically he expresses beyond the notation in penetrating detail. And then he forcibly communicates this to us with his mind, heart and soul.

The early Beethoven Sonata in D major Op.10 No.3 was the next work before the interval. I think I have never heard this work in concert before.  Here again he adopted very moderate tempi which revealed usually unheard internal details. Sokolov made much of the small motif that begins the First Movement and allowed it to grow organically, even relentlessly with his phenomenal control over extraordinary varieties and degrees of staccato and legato. The melancholy and pathos of the Largo e mesto would move the very stones to tears. The audience was at one with the pianist in this movement. A powerful silence reigned as this conjurer drew us into the music. We were no longer simply an audience listening to a concert, we were inhabiting the heart of Beethoven's spirit. An extraordinary musical moment I shall treasure. This made the lyricism of the Menuetto even more powerfully joyful and sweet as if the sun had suddenly emerged from behind a cloud. The humour of the Rondo too benefited from the poignancy of the Largo. Then a central mood of rage erupted alternating with shifting emotions punctuated by grotesqueries and quirkiness. Sokolov has the ability to raise previously familiar and possibly underrated early works to extraordinary heights of magnificence and spiritual significance through his deep musical perception and the profound vital force that courses through him.  As the Welsh poet Dylan Thomas wrote:

The force that drives the water through the rocks
Drives my red blood;
What can I say about his recondite interpretation of the Chopin Sonata in B Minor Op. 58 that could be of the slightest significance? Under the fingers and within the soul of Sokolov the work was transformed into a mighty edifice into an intensely individual conception of the work. Not everyone will like his view of this Chopin sonata...some I am sure would have been irritated. He added extra or different harmonies and progressions here too which did not bother me unduly. It upset the well-informed musical couple seated in front of me who gave a little tremble at this Chopinesque 'blasphemy'. However it may be a variant reading from another autograph edition of the sonata that Sokolov happens to have researched and likes. He does not strike me as a whimsical pianist.

Again the glorious sound he produces, ravishing tone and his magnificent technique in so many different parameters of keyboard playing, drew us inexorably into the heart of his vision of the music, a rare and singular view of the work - so visionary and 'disassembled' in fact that it verged at moments dangerously on the mannered. Sokolov extracted every atom of meaning from the score. 'There are the notes, there is what is behind the notes and there is what is between the notes' to quote the great Ignaz Friedman. But this is to quibble and betray my own musical mediocrity faced with coming to terms with this unique yet self-consistent interpretation.

Tumultuous applause and 6 encores that lasted another 45 minutes! The new fashion is for three part recitals! Sokolov is very generous with encores in Warsaw.

Three sublime pieces of Schubert - two of the Impromptus Op. 90 No: 2 and No:4 and the most heartrending account of the Klavierstucke in E-flat major D.946 No.2 I have ever heard. Sokolov understands Schubert as no other living pianist including Alfred Brendel - he conceives of a far more overtly romantic Schubert, a man of a more touching sensibility than the great Austrian pianist envisages. Tears.

Two dreamy and lyrical Chopin Mazurkas in luminous tone (no peasants present here) that drew us into the intimacy of a drawing room presided over by Prince Antoni Radziwill. His tone glorious, his touch like velvet in these works. The seductive perfumes of Sarmatia.

The last encore was a charming waltz by Aleksander Gribojedow that I had never heard before.

Tumultuous applause - shouts and general pandemonium. Cries of 'Genius! Genius!' which were a little too much for me...a new need by audiences betrays itself ? Up house lights otherwise we would have been there all night!

How lucky you are if you were in company with me as part of the audience in the Warsaw Filharmonia this evening. Such exceptional musical experiences are given to few of us. Not everyone would have liked this concert however as it was deeply reflective and elegiac in character, perhaps given the recent tragic circumstances of the pianist.

The great German conductor Wilhelm Furtwängler considered music-making by composer or interpreter as an act of love. He felt Beethoven had clearly ‘loved humanity’ when he was composing the Ninth Symphony. This I felt tonight. I felt at once demolished, wrung out emotionally as I slowly walked home through the clammy autumn night. Yet I was also uplifted and inspired by this powerful manifestation of the tender and creative spirit of man in face of the great reality of death, surrounded as we are by unspeakable contemporary horrors on every side. 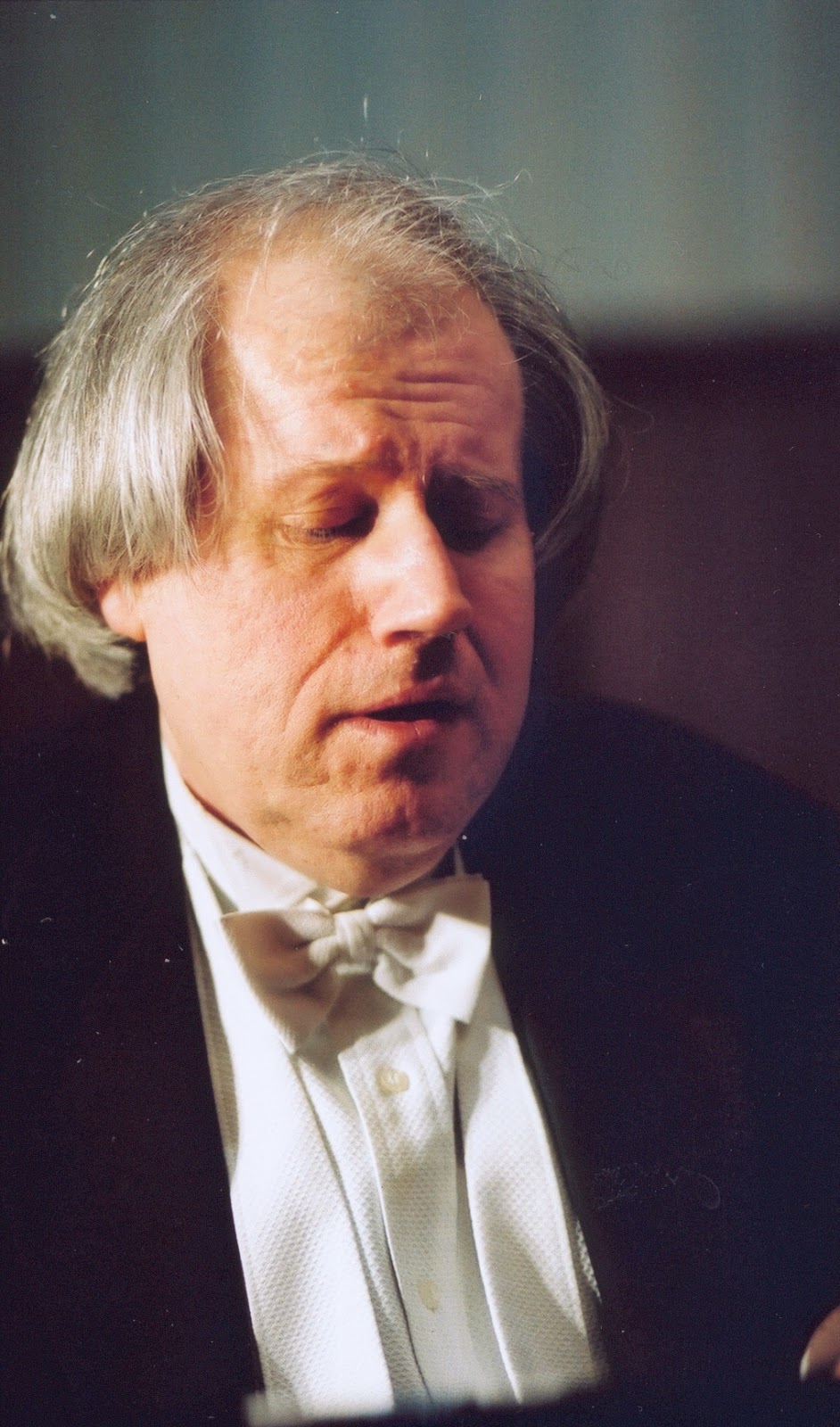