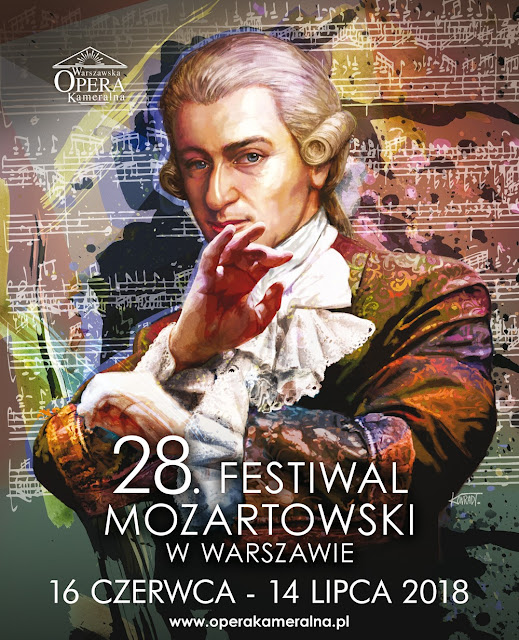 Perhaps it is a truism to observe that in life everything is in a state of constant flux at the sub-atomic, micro and macro levels. In quantum mechanics the nature of light has proven to be both particle and wave. Meditation on this mystery indicates one must always move forward in life or it fades away like day into night. Even the artistic nature of the Warszawska Opera Kameralna must obey such laws of physical evolution. Tonight I listened and watched a valiant attempt to maintain in spirit and professionalism, a glorious past operatic tradition in Warsaw. Inevitably for those old enough to remember, the ghost of the founder and former artistic director of the company, Stefan Sutkowski, hovered over the proceedings, in the main rather benignly.

Mozart and his immortal music is bound to survive in this rejuvenated capital of a country that once did not even appear on maps but was merely a state of mind within the psyche of its former national inhabitants. Warsaw is no great distance from Vienna and Mozart's wildly popular 'absolute hit' Die Entführung aus dem Serail (The Abduction from the Seraglio) was produced in May 1783 by a touring German company for the birthday of King Stanisław Augustus just ten months after the Vienna première. Don Giovanni arrived in the capital to play in the National Theatre before the king in October 1789 with the same Italian Domenico Guardasoni company that had premièred the opera just two years before in Prague with Mozart conducting. His operas were performed in Warsaw well in advance of Berlin, Paris or London.

The city has had a distinguished operatic heritage since the early baroque period when it was the only capital other than Rome to have had an opera theater that hosted famous Italian soloists. Many works were especially written for the Warsaw stage during the seventeenth century. The volatile Tarquinio Merula wrote a theatrical duet called Satiro e Corisca for King Zygmunt III Vasa performed in Warsaw in the summer of 1626 some ten years before public operatic activities began in Venice. Merula (1595–1665) was a seminal composer, organist and violinist during the development of the early baroque, who composed in the Venetian style of Claudio Monteverdi and Giovanni Gabrieli. A native of Cremona, he came to Warsaw in 1621 for five years at the behest of the Swedish King of Poland Zygmunt III Vasa. ‘The longest and possibly the most incompetent reign in Polish history’ observed Adam Zamoyski. The king’s political ineptitude and his generous support of the arts may well be connected. Merula’s private life was as much a shambles as his compositions were formally adventurous.

The programme was an extensive potpourri of Mozart arias and overtures from various operas that will be presented during the festival. The orchestra Musicae Antiquae Collegium Varsoviense (who play permanently on period instruments) was directed by the Brazilian conductor José Maria Florêncio, a musician of distinction and wide experience in both the traditional and contemporary repertoire. They performed together with the Vocal Ensemble of the Warsaw Chamber Opera.

The evening opened with the overture to Don Giovanni which set a suitable, indeed inevitable, inescapable Mozartian ambiance. Energy and drive here certainly in a rather fast tempo yet I felt the ominous threat of damnation contained within the overture, the 'evil' haunting the background of secure bravado, rather absent. This was followed by a strong performance by the Chorus Nettuno s'onori  from Idomeneo, Re di Creta  one of my favourite Mozart operas. The contrast within Mozart here between the formality of the classical style and his inhabiting the cusp of the full-blown romantic was fascinating for me. Various choruses interspersed the arias with mixed results, the finest of which was the passionate energy Florêncio brought to the final chorus from Die Zauberflöte.

It is well to remember that the opera orchestral ensemble are used to playing in the hidden pit of their normal venue and to suddenly appear in full glare on stage in the prestigious Lutosławski radio studio playing well established orchestral Mozart overtures on period instruments must be quite a challenge. Generally they acquitted themselves well and sensitively under the precise baton of José Maria Florêncio, especially the strings and woodwinds, but at times I felt the brass needed more finesse and sensitivity.

The star of the evening was the Argentinian soprano Verónica Cangemi. She was born in Mendoza in 1964. She was a principal cellist with the Mendoza Symphony Orchestra before her vocal abilities were discovered by Heather Harper.

Cangemi performs widely in concert throughout Europe and in Buenos Aires. She has recorded extensively, for labels including Deutsche Grammophon and Naïve. Argentine soprano Verónica Cangemi made her Royal Opera debut in 2013 as Micaëla (Carmen).(People Royal Opera House, Covent Garden website).

She sang nine Mozart arias from various operas and an encore. Quite a task to encompass such a number of different roles requiring great vocal stamina and wide and versatile acting skills. Her experience and distinction as an international 'Diva' in the Mozart repertoire became immediately clear from the outset.


The wide expressive range, colour and pure intonation of the arresting voice that flowed from the dramatic soprano Cangemi was evident in her first aria, the emotional Crudele? - Non mi dir sung by Donna Anna in Don Giovanni. Such emotional drama and the ability to communicate it effectively and movingly to the audience was also obvious in Donna Elvira's aria In quali eccessi - Mi tradi quell'alma ingrata from the same opera. 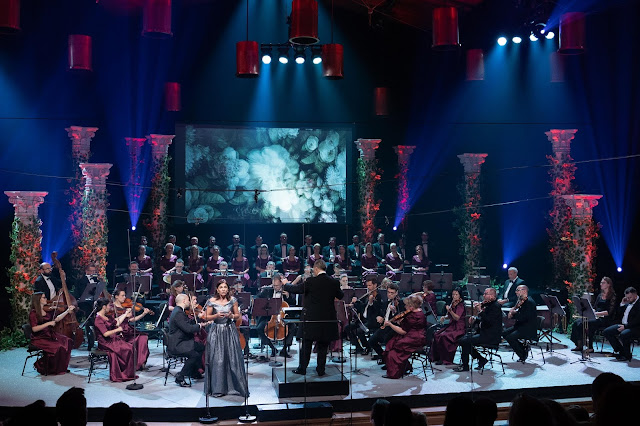 A soprano possessing great culture and sensibility, I found her mobile facial expressions affectingly eloquent of the internal emotional state of each character. Very occasionally a slight blemish appeared in this cultivated voice but what of that? We were present to be entertained and were richly so. I found her radiant and disarming Latin smile at the conclusion of each aria so charming and civilized.


Unlike far too many Polish opera singers, her Italian diction was perfect and the language easily understandable especially in Countess Almaviva's recitative and aria E Susanna non vien - Dove sono from Le nozze di Figaro. Her mastery of vocal range was evident in Fiordiligi's demanding Per pieta from Cosi fan tutte . She brought a sensitive and refined elegance to Susanna's recitative and aria Giunse alfin il momento - Deh vieni from Le nozze. 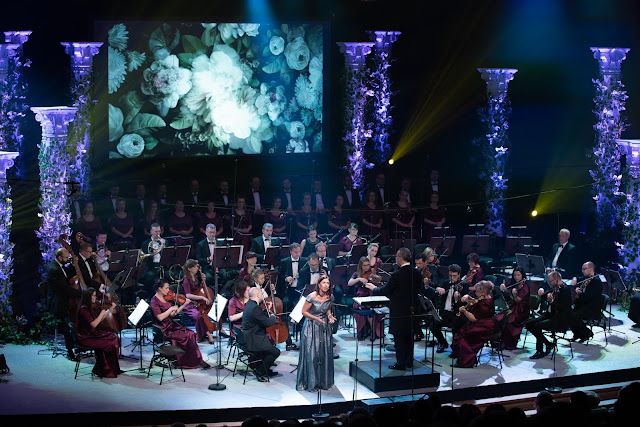 Her authentic sense of humour and theatre, a vivacity both subtle and engaging, was amusingly evident in Despina's aria Una donna a quindici anni also from Cosi. Elements of a refined sensibility beautifully coloured Ilia's aria Se il padre perdei from Idomeneo, Re di Creta. 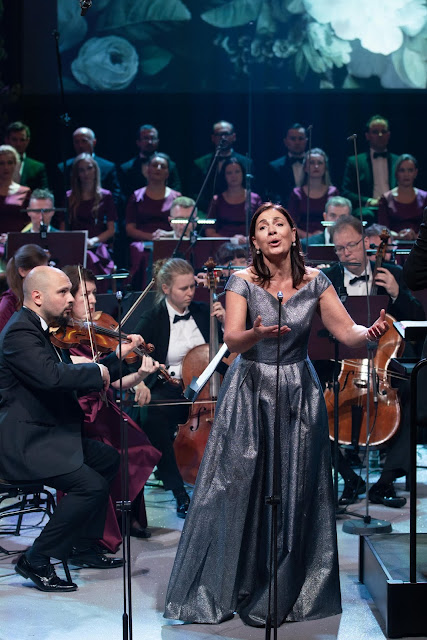 It is such a rare treat to have in Warsaw such a distinguished soprano, a renowned operatic figure singing a familiar  group of Mozart operatic arias.  I cannot even remember the last occasion this occurred with an internationally distinguished female singer from abroad. My congratulations to Opera Kameralna for facilitating this for us.


Between arias some well researched and informative introductory notes were helpfully presented by the Artistic Director of the Warsaw Chamber Opera, Alicja Węgorzewska-Whiskerd, PhD.


The other singer of the evening accompanying Cangemi was the tall, promising and youthful Polish bass-baritone Artur Janda. He graduated from the Fryderyk Chopin University of Music in Warsaw and has often been a soloist in the Warsaw Chamber Opera as well as possessing a rich Bach and Handel oratorio repertoire.

For us Janda sang three arias and a duet with Cangemi. His strong, expressive, deep and powerful voice never depressed us with ennui as do many mediocre bass-baritones. It never betrayed the slightest strain and delivered song with ease and fluidity. His expressive face betrayed great acting and theater skills combined with drama and an excellent sense of infectious humour.

Janda possesses a powerful and natural ability to communicate and engage an audience. This was obvious in his first aria, Figaro's recitative and aria Tutto e disposto - Aprite un po'quegli occhi  from Le nozze di Figaro. This was again evident in Figaro's aria Non piu andrai again from Le nozze di Figaro. An opportunity for a characterful, humorous and  theatrical presentation of his strongly colourful voice was offered by Guglielmo's aria Donne mie la fate a tanti  from Cosi fan tutte (an opera expressing sentiments not for those of a feminist persuasion!) 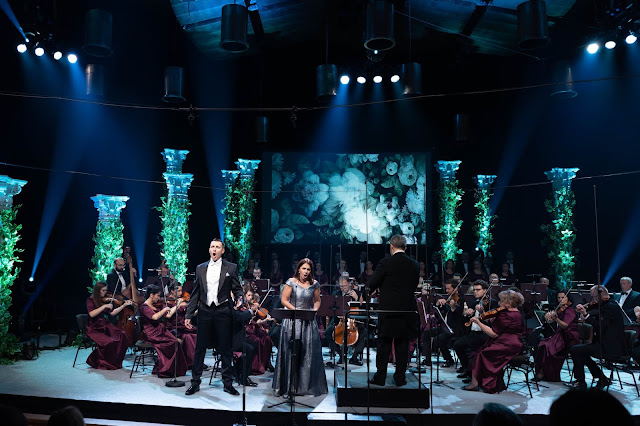 As an encore Cangemi repeated Despina's aria Una donna a quindici anni also from Cosi with even greater winning playfulness and seductive Latin vivaciousness, taking the heart of the audience in her palm with optimism and verve.

One remarkable and unexpected survival of earlier days became evident at the reception that followed the concert. ‘I call my opera house the ambassador’s club!’ Stefan Sutkowski once told me enthusiastically in the early 1990s. He had a loyal following in the Warsaw diplomatic corps. To my very great pleasure this clearly continues as evidenced by the presence of possibly every South American ambassador at the concert.

So all in all, a particularity enjoyable and festive opening to the 28th Mozart Festival in Warsaw that bodes well for the future staging of the company's operatic repertoire in particularly challenging times, albeit inevitably allied to the difficult maintenance of a highly respected Varsovian artistic tradition.

'Music for Peace' Project : Hiroshima, Warsaw and Chopin - The glorious rebirth of two cities celebrating the 100th anniversary of Polish-Japanese relations through the music of Chopin

This evening I have just arrived in Hiroshima in Japan from Warsaw on this is my first visit to the country. Such a long and tiring journey from Poland but worth every minute given the humanist aim. I intend to keep a daily internet journal of my experiences here over the next four days as part of an initiative known as the ‘Music for Peace’ project. Perhaps a few more personal observations as well.
The concept brings together communities of different nations and cultures, in this case musicians from Poland, France and Japan, performing together and engaged in workshops  and commemorative activities with the Hiroshima Symphony Orchestra. This laudable aim is to achieve closer international cooperation and understanding. The passionate love of the music of Fryderyk Chopin in Japan scarcely need underlining. In the 17th International Fryderyk Chopin Piano Competition organised by the National Fryderyk Chopin Institute (NIFC) in 2015, of the 455 pianists from 45 countries who applied, 88 …
Read more

From Chopin to Moniuszko
All Photos Wojciech Grzedzinski

And so another fine edition of Chopin and His Europe (Chopin i jego Europa) concludes with a concert that was rather inspiring and certainly expressing optimistic signs for the future of orchestral music in Warsaw. Many fine concerts ahead!

01.09.19 Sunday 20:00 Warsaw Philharmonic Concert Hall Symphonic Concert Performers Alena Baeva violin Andrey Boreyko conductor Warsaw Philharmonic Orchestra Program Witold Lutosławski Symphonic Variations
Probably, there are many works that can be indicated is symbolic final of the interwar period in music. However, perhaps the Symphonic Variations by Witold Lutosławski deserves a special place. The composer created this orchestral firework in 1936 and we can hear references to Szymanowski’s music in it. I was sonically overwhelmed by this performance and am constantly astonished at the vivid musical imagination, the scope of his sound palette, the range of emotional expression and sheer grandeur of this g…
Read more