I found re-reading my competition review notes of Dimitry Shishkin, winner of the 6th prize during the 17th International Fryderyk Chopin Competition in 2015, rather interesting. It is always instructive to look back at the written record of his performance, particularly in light of his recent magnificent 2nd prize in the 16th International Pyotr Tchaikovsky Competition 2019.

In such an ephemeral art as musical performance, it is always constructive to glance back at past performance impressions when present victories emerge. Possibly the unique value of my modest efforts is at least the preservation of an historical record. 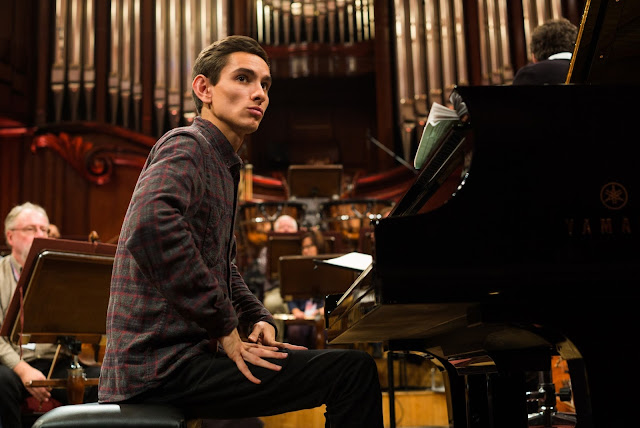 Next to Eric Lu and Kate Liu by far the most astonishing pianist so far in this competition . He is genuinely in the Richter, Gilels mould of fertile imagination, unique reading of the score and breathtaking virtuosity in performance. Rich tone, rather light touch for a Russian and superb control of dynamics, pedalling and articulation. This was absolutely fantastic playing on every level far beyond what is called mere 'technique' and 'musicality' either in or out of any competition. Packed with electrical excitement. A unique 'voice'.

I have never heard anything quite like it for years. Really. Unique. He was already playing short works at the age of 2. He is also a composer. The most noble, measured, controlled A-flat major Polonaise Op. 53 I have ever heard - and we have heard some in this competition and out of it! The LH 'military octave spirals' were spellbinding, effortless and hauntingly threatening. The opening to the B-flat minor Scherzo was the forbidding question with an answer from the grave just as Chopin desired. An improvised compositional quality throughout - a player entirely immersed in his own sound world. 'Authentic' Chopin in the John Rinkean sense.

Shishkin is not a profound Chopin poet like Eric Lu but if any pianist was to convince me of Chopin in a modern dramatic and dynamic style on a Steinway it is was this pianist. A body attached to a pair of hands.

Here we have a truly developed artist. A unique 'soul' in the Dostoevskyian sense. I had the distinct feeling it was as if I was standing before a Cubist of Fauvist painting by Braque or Cezanne for the first time. Not sure what exactly to make of it but convinced of its individual and almost visionary qualities.

A magnificent Stage II. He will take some beating in this competition I can tell you but I have not heard everyone in Stage II yet. Of course the jury decision will be a compromise of sorts and this is never kind to individuality of a high order such as this.

This Stage did not compare in individuality and sheer interpretative courage with his Stages I & II. I felt the Mazurkas Op. 59 were more imitative of Polish models than was necessary. Of course he retained the magnificent tone, a refined sound that we do not often associate with Russian pianists - more French in character. His digital dexterity is mind bending. The four Impromptus were elegantly brought off with immense refinement of touch and articulation. I found his Sonata Op.35  lacking any real sense of an unfolding tragic destiny, not sufficiently emotionally fractured despite Shishkin's formidable pianistic qualities. Finalist.

Dimitry Shiskin (Russia)
As I had anticipated, this was a profoundly creative performance of the E minor Concerto Op. 11 from the evidence of previous stages of the competition. This by a pianist of unique personality and character who had never before played with an orchestra! The rethinking of the work would not please the professors but satisfied me immensely. Chopin lives!

I felt the Allegro maestoso to be a noble and aristocratic conception, so strong in fact that I could feel the orchestra and conductor changing their approach to the music as it unfolded. This continued throughout. I felt the interpretation was poised and musical in a creative manner not giving us the standard product of the academies, breaking rules but not to the detriment of the composition but bringing forth a new conception. Such unaccustomed visions are bound to upset those preoccupied with structurally 'correct' expectations and theories set solid over time. I thought his detailed phrasing musically inspired. Strong left hand.

The Romance Larghetto began closer to Largo. But how was Larghetto conceived in 1830? Can metronome markings be trusted a posteriori ? The movement had a beautiful, round, golden bel canto singing tone in this glorious melody. As I said in tone and touch Shiskin sounds more French in refinement than Russian. He creates a unique sound from the instrument. He conceived of the movement as a series of episodes loosely linked, like some great operatic aria of the human spirit expressing itself with the greatest simplicity. I was very, very moved. I did not feel the movement as 'fractured' but wonderfully recreated by such an interesting and inventive episodic approach. Transcendental simplicity emerged for me with magnificently perceived 'musical' phrasing that revealed hidden treasures.

The Allegro vivace was crystalline in tone and transparent. Again the effect on the orchestra of this unaccustomed approach, yet within acceptable limits, made them play more energetically. His hands as you watch them seem to have a life of their own, like a scene from a Surrealist film by Luis Buñuel. The sound of the ecstatic styl brillant figuration was like a cascading waterfall. Fabulous.

I heard in an interview with Shishkin that he is also a painter as well as a composer. This inherent creativity explains a great deal about his reconception of this work. As a creative artist he could hardly do otherwise. Creativity is the fibre of his being. Such an individual invention will not be to everyone's taste and certainly not in matters of Chopinesque 'correctness'.

However this stance is perfectly in keeping with the original eighteenth and nineteenth century role of the composer-pianist. The only competitor true to this calling. For me his was a self-consistent vision of great majesty and power, the musical meaning  of the design absolutely clear. Shiskin has a great deal to say of unique interest about Chopin's music and in particular this interpretation of a standard work in the repertoire.

For my full account of the 17th International Fryderyk Chopin Competition in 2015: