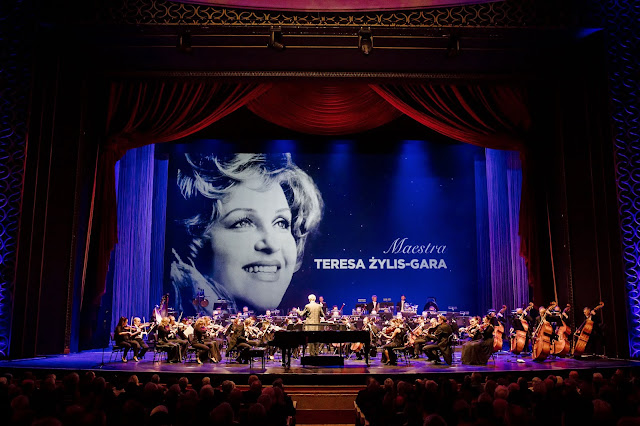 One of the greatest opera singers at the turn of the 20th and 21st centuries
Her unsurpassed lyrical soprano with a captivating color and dramatic possibilities delights both listeners of concert halls and the audience of opera theaters around the world.
She was born in Landwarów near Vilnius. She studied at the Łódź conservatory with prof. Olga Olgina. She won her first laurels by winning the Intercollegiate Singers Competition in Warsaw in 1953. In the years 1954–1955 she was involved as a soloist of the State Philharmonic in Krakow. She made her debut on the opera stage at the Krakow Opera, creating the main role in the opera Halka by Stanisław Moniuszko.
The breakthrough in her career was brought by the artist's prize at the Bavarian Radio International Vocal Competition in Munich. Soon after this success, she became a soloist in the opera theater in Oberhausen, and then in Dortmund. Already as a primadonna she was associated with one of the best German scenes - Deutsches Oper am Rhein in Düsseldorf. Singer's rich palette of vocal possibilities quickly gained great recognition. the artist's invitation to take part in the renowned festival in Glyndebourne, where she performed brilliantly in the party of Octavian in  Rosenkavalier by Richard Strauss.
Her debut at the Paris Opera, on the stage of which she created the character of Donna Elvira in  Don Giovanni by Wolfgang Amadeus Mozart, initiated the artist's great world career. Teresa Żylis-Gara performed at the Mozart Festival in Salzburg under the baton of Herbert von Karajan, debuted in London's Covent Garden as Violetta in  TraviataGiuseppe Verdi, she sang with stunning success in San Francisco to crown 1968 with her contract with the Metropolitan Opera in New York. She got involved with this scene for the longest time. The greatest opera houses of the whole world were also the audience of primadonna successes: Milan's La Scala, Wiener Staatsoper, Munich, Hamburg, Berlin, Tokyo, Buenos Aires, Warsaw and many others. The artist has performed at the most renowned music festivals: Salzburg, Orange, Aix-en-Provence, Glyndebourne.
The artist's repertoire is impressive; includes great roles in the operas of Mozart, Verdi, Puccini, R. Strauss, Chausson, Tchaikovsky and many others. Her stage partners were the greatest opera artists: Carlo Bergonzi, José Carreras, Franco Corelli, Fiorenza Cosotto, Plácido Domingo, Mikołaj Giaurov, Sherill Milnes, Luciano Pavarotti, Ruggiero Raimondi, Jon Vickers, Wiesław Ochman, Montserrat Caballé, Teresa Stratas many others.
Being extremely successful in opera parts, the artist did not neglect the song and oratorio repertoire. She has recorded songs belonging to each of these music genres for renowned record companies: EMI, Deutsche Grammophon, Harmonia Mundi, Erato, as well as for Polskie Nagrania and DUX. The recordings include both great opera creations (including Don Giovanni Mozart, Le Roi Arthus Chausson, Ariadne auf Naxos R. Strauss), and further ( Passion according to Saint Mateusz Bach, Requiem Dvořák, Messa da requiem Verdi, Das klagende Lied Mahler ), as well as songs by Chopin, Moniuszko, Karłowicz, Paderewski, Lalo, Faure, Duparc, Canteloube.
Recent years have brought Maestra's expansion to include teaching work. The artist conducts highly successful Master Courses of Techniques and Vocal Interpretation in the country and abroad. This work results in the successes of young singers, for whom contact with Teresa Żylis-Gara may be of decisive importance in the development of their artistic skills and personality. The artist's didactic achievements constituted the basis for granting Maester the title of professor of musical arts in August 1999. In November 2004, prof. Teresa Żylis-Gara received the title of doctor honoris causa of the Music Academy Karol Lipiński in Wroclaw.
By order of the President of the Republic of Poland of January 13, 2011 prof. Teresa Żylis-Gara was decorated with the Commander's Cross with the Star of the Order of Polonia Restituta. In January 2012, based on the decision of the President of the French Republic, the Artist was awarded the Officer's Order of the Legion of Honor of the French Republic.
In October 2016, prof. Teresa Żylis-Gara received the title of doctor honoris causa of the Music Academy Grażyna and Kiejstut Bacewicz in Łódź.
Orchestra of the National Opera - Conductor - Grzegorz Nowak
Direction
Jaroslaw Kilian
Master of Ceremonies
Wiesław Ochman

This was a most moving, emotionally deeply rewarding concert in the presence of the Maestra who brought with her charisma all the glamour, refinement and sensibility of a past age and her thirty odd years on the stage of the Metropolitan Opera, New York.  There were many video clips of her past roles (especially as Cio-Cio-san in Puccini Madame Butterfly) back projected on the stage. I will not distract from the commemoration focus with distracting assessment of the artists who performed save to say it was an impressive and highly enjoyable evening. Many speeches made by distinguished persons reminding us and praising her illustrious career.

Then occurred one of those extraordinary, unforgettable moments that appear on the Warsaw classical music scene like a glittering flying fish emerging from an ocean of conventionality. At the age of 90, Teresa Żylis-Gara spontaneously decided to sing for us! There was much scurrying about for a suitable accompanist who miraculously emerged from the audience. She sang the affecting Chopin song  Życzenie (Wishes) set to words by the Polish Romantic poet Stefan Witwicki (1801-1847). Despite her age, the lyricism, timbre and velvet smoothness of her voice, profoundly musical phrasing and sensibility rather eclipsed our younger artists! 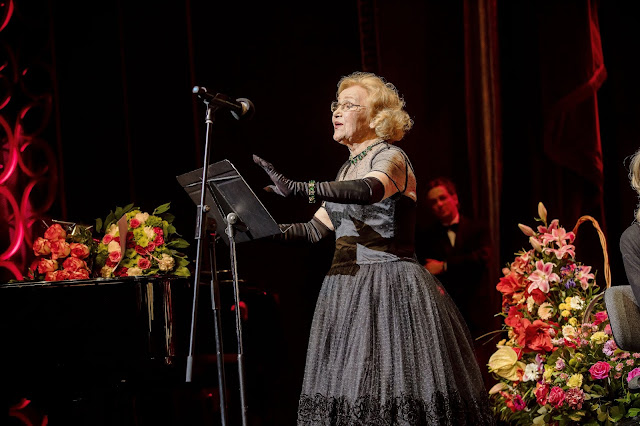 WISHES
If I were the sun in the sky,
I wouldn't shine just for you.
Neither on the waters nor on the forests:
But all the time,
Under your window, and only for you,
If I could change myself in the sun.

If I were a bird in a beautiful grove, I would only
like to sleep in your country.
Neither on the waters nor on the forests:
But all the time,
Under your window, and only for you ...
Why can't I change myself in a bird? 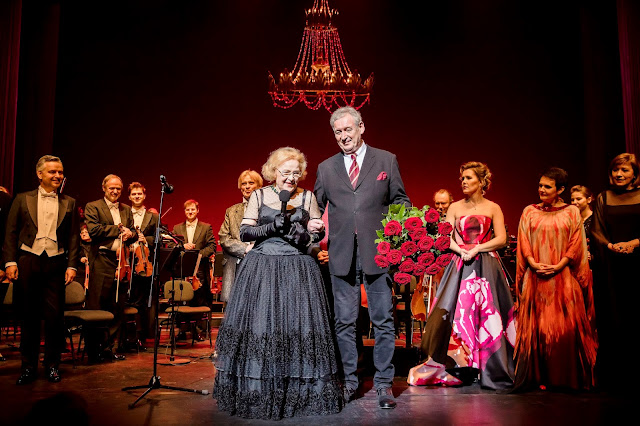