Upon his arrival in Paris on 5 October 1831, Chopin had no set plans to stay in the city. However after six weeks residence at an inn near the diligence terminus in the Rue de la Cité Bergère, he took an apartment with a balcony and panoramic views across Paris at 27 Boulevard Poissonnière.

In November 1831 he wrote of his initial impressions in an extraordinarily frank and one might venture 'manly' letter to one of his travelling companions, Alfons Kumelski. He describes the immense contrasts within the city :

'You find here the greatest splendour, the greatest squalor, the greatest virtue, and the greatest vice; at every step you see posters advertising cures for venereal disease - nothing but cries, noise, din, and mud, past anything you can imagine.'  Later in the missive he speaks of the large numbers of prostitutes ('sisters of mercy') and confesses to a 'souvenir of Teresa (despite the ministrations of Bénédict who considers my misfortune insignificant) has not allowed me to taste the forbidden fruit. I have already got to know a few lady vocalists - and the ladies here are even more eager for 'duets' than those from the Tyrol. [quoted in Fryderyk Chopin, Alan Walker, London 2018 p.213]

The first few weeks were a financial trial for Chopin. His first public appearance was on 26 February at the Salle Pleyel arranged by the controversial pianist and pedagogue Kalkbrenner. He played the Concerto in E minor in the first half and the spectacular 'Là ci darem' Variations in the second. The concert concluded with a monumental piece in honor of Chopin by Kalkbrenner for six pianos with renowned pianists living in Paris entitled 'Grand Polonaise preceded by an Introduction and March'.

Of Chopin's compositions the distinguished critic François-Joseph Fétis wrote '...an abundance of original ideas of a kind to be found nowhere else.'  The twenty-two-year-old Franz Liszt wrote in his biography of Chopin that this concert revealed '...the talent that was opening a new phase of poetic sentiment...' Unfortunately the concert was not well attended and lost money.

Imagine a world without electricity then read on...

In 1829 a cholera pandemic had occurred in Russia. It proceeded by slow degrees towards Poland before viciously striking London, whence it became known by the nickname 'King Cholera'. Behaviour was not unlike the cornaravirus today. Then as now, doctors did not know the cause or origin of the disease which caused great fear. Many thought it came from the miasma (polluted air of cities) until it was finally discovered to be carried in polluted water supplies.

On 26 March 1832, six months after Chopin's arrival in the great Parisian metropolis, it claimed its first victim. In a letter to Józef Nowakowski 15 April 1832 Chopin wrote mainly of the effect of the epidemic on his income through the evaporation of lessons from his wealthy aristocratic patrons who had fled to the countryside and the difficulties of giving concerts.  Most of the afflicted were dead within a day or two. This six-month cholera epidemic was to claim 7,000 lives in the next two weeks. In total some 19,000 citizens fell victim to the disease. Further from the letter:

'Rossini is leaving. Rubini and Lablache the same, Malibran is in Brussels, Devrient in London; [...] As far as pianists are concerned , Herz is going to England. Mendelssohmn ditto. Pixis to Germany, Lisztto Switzerland, Kalkbrenner doesn't know wat to do, so fearful is he of cholera; Hiller is in Frankfurt'

He also wrote of the volatile political situation in Paris 'which has paralysed the entire country...' The restoration of the Bourbon dynasty was not welcomed by those of a Republican disposition. Louis-Philippe was sworn in as King Louis-Philippe I on 9 August 1830. At first, he was much loved and called the 'Citizen King' and the 'bourgeois monarch', but his popularity suffered as his government was perceived as increasingly conservative and monarchical. Under his management, the conditions of the working classes deteriorated.

On May 16, 1832, occurred the death of the king's powerful supporter, President of the Council, Casimir Pierre Périer. Then on 1 June 1832, Jean Maximilien Lamarque, a popular former Army commander who became a member of the French parliament and was critical of the monarchy, died of cholera. The riots that followed his funeral sparked the June Rebellion which was ruthlessly crushed and defeated. Victor Hugo described the rebellion in his novel Les Misérables which is a feature of the musical and film based on the book.

Chopin witnessed and lived through all these upheavals. Near death in 1849, he faced another cholera pandemic and more serious political upheavals. Four months before his death in a letter to Wojciech Grzymala dated 18 June 1849, he writes with his characteristic humour even then

'...I'm gasping and coughing just the same, it's just that I bear it more easily. I haven't yet begun to play - I am unable to compose - I don't know what sort of hay I'll be eating soon. Everyone is leaving - some from fear of cholera, others from fear of revolution.'


When one examines the historical and social context through which great composers lived, one tends to see them as similar in so many ways as 'ordinary' men rather than inaccessible godlike genius. Context is vital to understanding. They too are beset by financial worries, health horrors, political upheavals and war - all so similar in character to today. He cannot have remained indifferent to the mayhem around him, yet like all men and in particular as a Polish emigre, he was preoccupied with his own destiny and that of his blighted nation. I find it astonishing he was able to compose anything at all!

The German poet Heinrich Heine was living in Paris at the time of the cholera pandemic working as a journalist and examining the development of democracy and capitalism in France. His journals describe the beginning of the Paris Cholera epidemic of 1832. In particular he gave us a colourful account of a ball.

'That night, the balls were more crowded than ever; hilarious laughter all but drowned the louder music; one grew hot in the chahut, a fairly unequivocal dance, and gulped all kinds of ices and other cold drinks--when suddenly the merriest of the harlequins felt a chill in his legs, took off his mask, and to the amazement of all revealed a violet-blue face. It was soon discovered that this was no joke; the laughter died, and several wagon loads were driven directly from the ball to the Hotel-Dieu, the main hospital, where they arrived in their gaudy fancy dress and promptly died, too...[T]hose dead were said to have been buried so fast that not even their checkered fool's clothes were taken off them; and merrily as they lived they now lie in their graves.'   Heinrich Heine 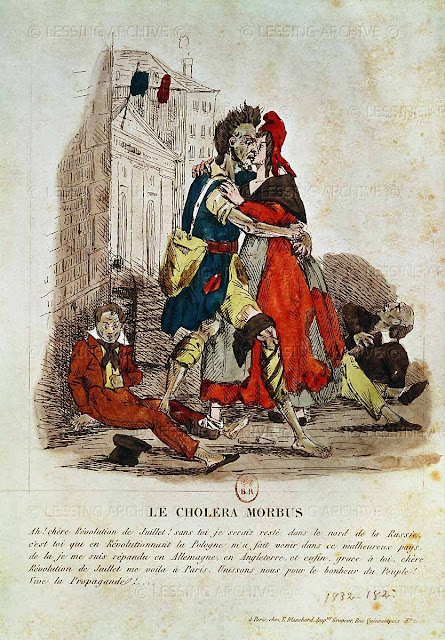 A far more extensive account was written by the American author, poet and editor Nathaniel Parker Willis (1806–1867) He was acquainted with Edgar Allan Poe and the poet Longfellow. He was a highly successful magazine writer. I make no apology for quoting this in full so one may conceive of what Chopin experienced and which must have influenced his febrile musical sensitivities and temperament in some way. Certainly in these early days in Paris, his struggle must have given rise to nostalgia for Poland, as he wrote many Mazurkas and Nocturnes as well as the wild and explosive, yet at times indescribably tender and lyrical, Scherzo in B minor Op.20.