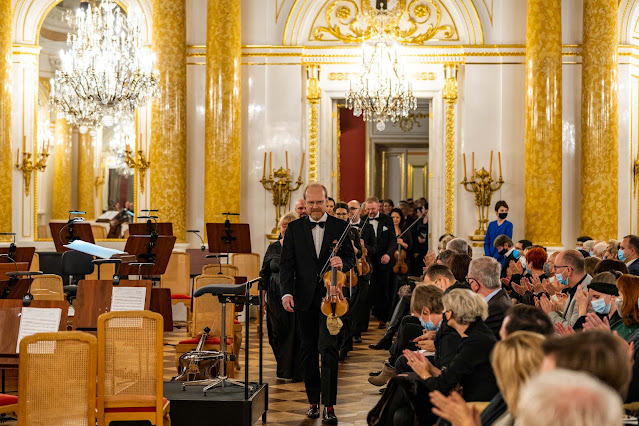 Dorota Szczepańska – soprano
Jan Jakub Monowid – alto
Aleksander Kunach – tenor
Artur Janda – bass
Vocal Ensemble of the Warsaw Chamber Opera
Musicae Antiquae Collegium Varsoviense
Conductor: Dirk Vermeulen
All photographs by Grzegorz Bargieł
Cantata I: Jauchzet, frohlocket, auf, preiset die Tage
Cantata II. Und es waren Hirten in derselben Gegend
Cantata III. Herrscher des Himmels, erhöre das Lallen
The festive joy and jubilation that exploded over us in a spectacular, pyrotechnical fashion with three baroque trumpets and timpani at the opening of the Christmas Oratorio instantly dispelled any pandemic-related melancholia or neurotic inturned thoughtfulness that may have overtaken the heart during the present human tragedy. Here once again was Bach in therapeutic and healing guise, embracing the exultation and festive elation of his own muscular creative musical life.
During 1734/1735 J.S.Bach composed three 'Oratorios' - Christmas, Easter and Ascension Day. An 'oratorio' was understood as as a vocal composition on a non-liturgical religious subject with a narrator. This concert concentrated on a careful selection of musical composition, arias and choruses.
Bach adopted as bases previously composed compositions.  This type of 'recycling' of earlier compositions, if you will, was known as 'parody' - a rather different meaning of the word to that of modern days. At this time Bach may have felt subconsciously in the congregation a slight turning away from the unsmiling Lutheran deep seriousness to an increasing openness to the secular flavour of some cantatas and their constituent music.
Bach as well as Picander would have been intimately associated with the selection of Biblical texts (St. Luke 2 1-21) to celebrate the birth of Christ. The 'cantatas' were written specifically for three holidays (25, 26, 27 December). Bach's devotion to traditional Lutheran expression was leavened by his attraction and enthusiasm for newer and the newest poetry. A feeling of theatricality lies here, an operatic quality not so deeply buried in the theological message.
In a way, the word 'Cantata' is misleading terminology for the musical forms and styles Bach utilized combined in new ways in this oratorio. A whole work of cohesive unified nature emerges. In its instrumentation, chorale arrangements, structural symmetry and variation form, tone colour and emotional expressiveness, this masterpiece retains an immense popularity.The title page reads: ORATORIUM / Welches / die heilige Weyhnacht / über / In beyden / Haupt-Kirchen / zu Leipzig / musicieret wurde. / Anno 1734 ('The Oratorio which was performed at Christmas in the two main churches of Leipzig, 1734'). There were alternate morning and afternoon religious performances in the Thomaskirche and Nikolaikirche in Leipzig.
The Ballroom of the Royal Castle is a superb musical venue and an aesthetically overwhelming room. A period perfect setting for such a magnificent work. This contributed so much to our emotional involvement. Domenico Merlini (1730-1797), the distinguished eighteenth-century Italian architect from Brescia, who brought Palladianism to Poland, together with the Dresden-born architect Jan Christian Kamsetzer (1753-1795), designed it in the second half of the Neo-classical eighteenth century. They benefited from the valuable allegorical guidance of the Polish King Stanisław Augustus.
The room contains miraculously preserved elements of the original stucco work, the rescued statues of Apollo and Minerva by André Le Brun and a sculptural composition depicting an allegory of Justice and Peace. The original Royal Castle was methodically demolished by the Nazis with explosives placed by architects. New gold leaf now glisters from every crevice in a blaze of mirrored chandeliers in a overwhelming appearance similar to when construction was just completed.
This was a fine performance of a carefully and sensitively reduced original work. In the first part, the fine orchestra on period instruments showed it possessed the finest blazing trio of baroque trumpets I have ever heard in my life - perfect intonation, timbre and an exultant sound eminently suited to this opulent, resonant venue. An unforgettable, revelatory musical experience in the sheer quality and depth of sound. The joy and triumph of the Nativity was portrayed but shadows fall that are the beginning of the road to the Cross and the Redemption.
OPENING CHORUS
Rejoice. exult! up, glorify the days,
praise what the All Highest this day has done!
Set aside fear, banish lamentation
strike up a song full of joy and mirth!
Serve the All Highest with glorious choirs!
Let us worship the name of the Lord!
The second part is calm when the baby is sleeping in the barn 'where the ox had a meal before' and Mary sings an affecting lullaby 'Schlafe, mein Liebster'. The angels proclaim God's glory and announce the birth to the shepherds, inviting them to go to Bethlehem to worship the Savior. The Sinfonia is in a rhythm of Bach's favorite dance, the Siciliana. The sound of strings and flutes is, according to Albert Schweitzer, a symbol of the hosts of angels. They are matched by the voice of the tenor da caccia oboes, imitating the sound of shepherd's bagpipes and shawm.
The third part of the oratorio is a musical picture of the adoration of the Child by the shepherds. The magisterial first movement returns - once more a symbol of joy and majesty. 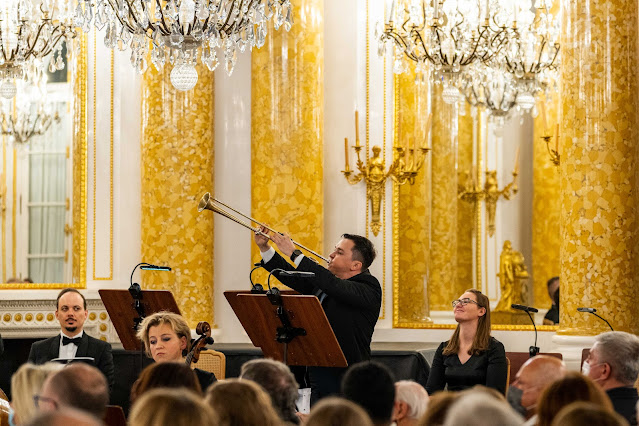 The soloists and choir were also most uplifting and expressive with inspiring intonation, synchronicity and cohesion with the orchestra and conductor. The energetic and musically inspired conductor Dirk Vermeulen dances to Bach on the podium and clearly has a close and inspirational understanding with the musicians and choir - 'Bach and the Dance of God'  indeed as Professor Wilfrid Mellers entitled his profound book on Bach. 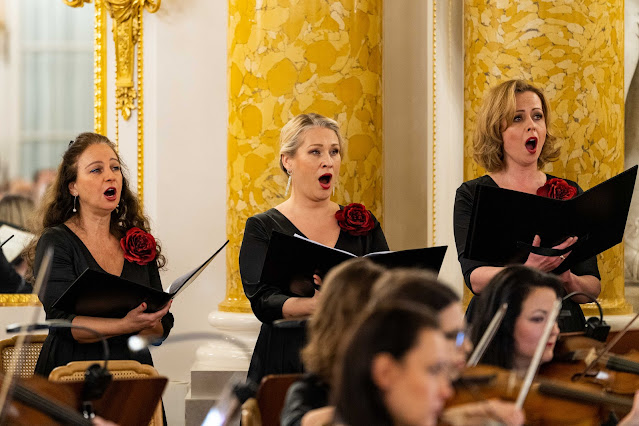 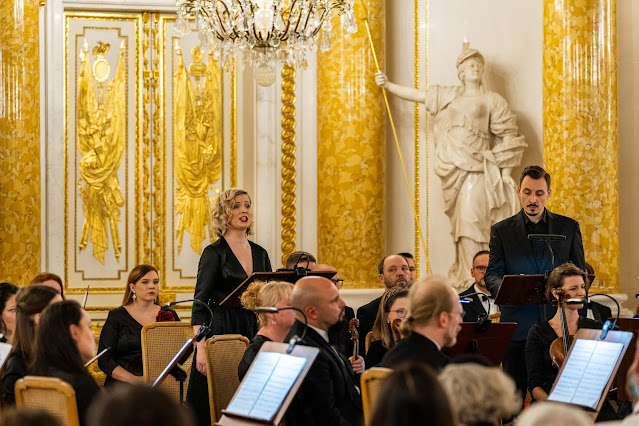 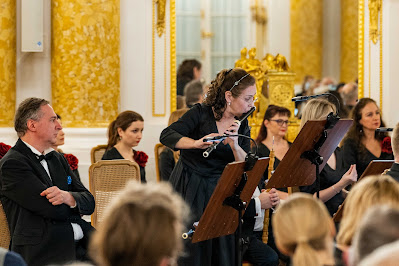 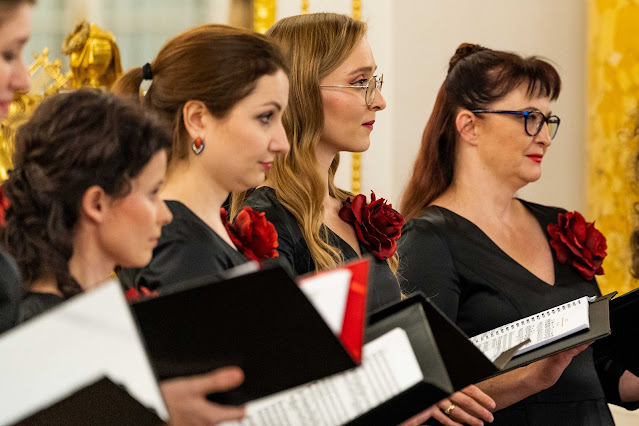 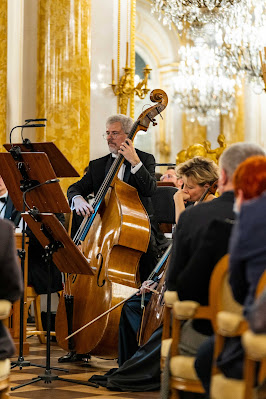 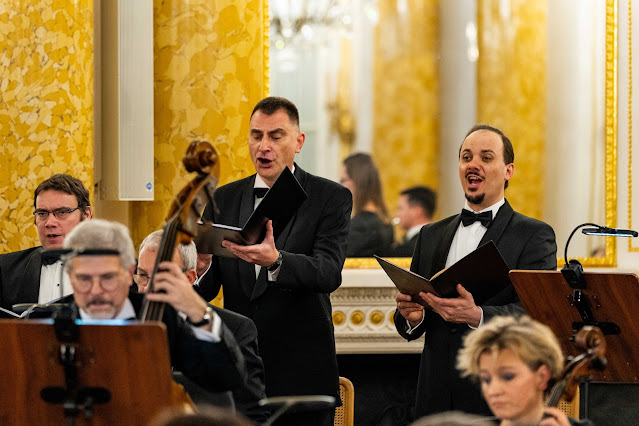 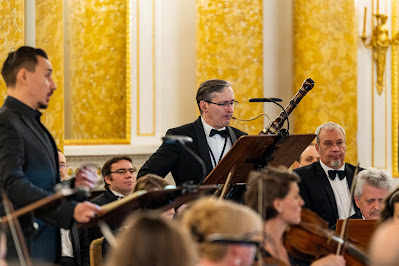