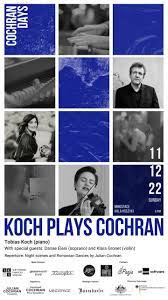 This musical performance and conversation with the composer Julian Cochran has stirred many memories in my recntly established world of Nostalgiaville. I moved into classical music in quite the reverse gear - from the jazz world of Oscar Peterson, to the contemporary classical music of say Olivier Messiaen, Stockhausen and Boulez back further in time through Chopin and Bach to the great operas of Monteverdi, finally to Josquin des Pres, Palestrina and Gregorian Chant.

The first image that springs into the viewfinder of my mind was my experiences during the avant-garde year of revolution 1968. During those years I was in Paris writing my own experimental 'indeterminate' avant garde texts influenced by the style of the Nouveau Roman literary movement (Marguerite Duras, Nathalie Sarraute, Alain Robbe-Grillet). I was deeply interested in the contemporary classical music of Messiaen, Nono, Berio, Dallapiccola, Penderecki, Pousseur, Stockhausen, Boulez, Kagel and Xenakis. I now tend to agree with Penderecki that the avant-garde movement in the arts oftentimes led these deeply imaginative artists into a creative cul-de-sac.

In 1968 I also attended as an observer many of the classes and premieres given by the German electronic composer Karlheinz Stockhausen at the Rheinische Musikschule in Cologne (Courses for New Music) together with the Australian composer David Anthony Ahern (1947–88) who was born in Sydney. He studied composition first with Nigel Butterley, then with Richard Meale. His first performed work was entitled After Mallarmé (Universal Edition 1966) for orchestra, but of the greatest notoriety was the piece entitled Ned Kelly Music (1967) for orchestra. The success of this piece elevated Ahern’s importance within the Australian avant garde. He later studied with Cornelius Cardew in London and later formed the AZ Music Ensemble at the Sydney Conservatorium of Music. His early death was a tragedy for exploratory and experimental music in Australia.

I continued with my own literary work but heavily influenced by the structure and scope of contemporary classical music, the Nouvelle Vague cinema, Nouveau Roman literature and French Symbolist poetry. Now at a rather more advanced age I was invited to hear contemporary compositions by another Australian composer.

The music we were to hear tonight was composed by the great Australian composer, Julian Cochran (b. 1974). He was formally trained as a pure mathematician; however, at the age of fourteen, received a scholarship to Adelaide's Elder Conservatorium for advanced piano studies. Following this Cochran taught himself to play many instruments, some of them virtuosically, and this foundation of folk-music and melodic invention remained central to Cochran's compositional approach. Cochran's music is today performed all over the world, from Carnegie Hall to Amsterdam's Concertgebouw and St. Petersburg's Philharmonic Hall, and continues to inspire an increasing number of pianists. The public's affection with Cochran is drawn from the remarkable inner logic interlaced throughout the music, an often present dance-like characteristic, and together its mysteriousness and refined opulence.

The mission of the Julian Cochran Foundation is to popularize the achievements of this great composer and to make knowledge about his life and work available to the public at large.

There is an interesting interview with Julian Cochran by Aidan Frazier here:

The concert was mounted by the Julian Cochran Foundation and held at Mindspace in Warsaw. This is a rather intimate and warmly atmospheric concert space, amply supplied with comfortable lounge seating, delicious Italian coffee and excellent wine. I cannot think of a more relaxed and gracious environment for new classical works to be performed without intellectual pretension.

I was familiar with a little of Julian Cochran's music from a concert given by the prize winner of the International Julian Cochran Piano Competition run by the Cochran Foundation.

https://www.cochranpianocompetition.com/icpc-2021 (future 2023 edition of the competition) 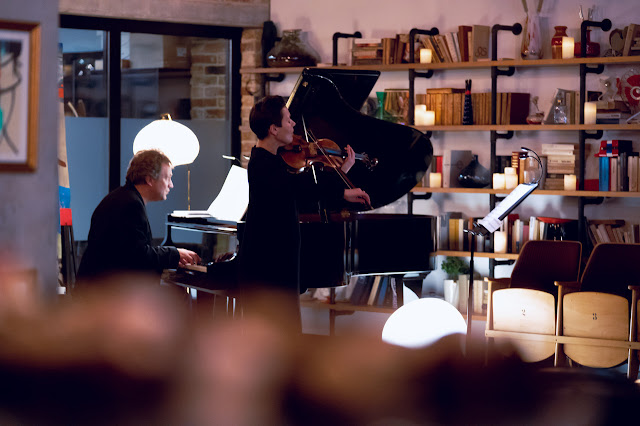 I found the Romanian Dances Nos. 1-3 & 5 with violin and piano remarkably moving emotionally and harmonically evocatively accessible. There are 6 dances originally written for piano alone. The fine violin playing and the opulent sound created on a remarkable instrument by Klara Gronet transported me at once into the deep folkloric traditions of Transylvania. Tobias Koch complemented this rich colour and rhythmic palette that they created together with great aesthetic discrimination and rare sensitive feeling for the folkloric tradition.

Here is a superb recording of Julian Cochran playing Romanian Dance No. 2. As an aesthetic bonus there are fine images of Romania layered upon the concert recording.

Before the concert I had spoken at length to him about his inspiration for the works we were to hear. In the Night Scenes his intimate relationship with Nature and 'the force that through the green fuse drives the flower' (Dylan Thomas) is romantically and and sensually clear. He spent many hours in a type of somnambulist dream gazing at the stars in the night sky possibly above the Mediterranean (The Stars). However, I could not help recollecting the quite extraordinary panalopy of stars of our Milky Way canopy, so clearly visible in the Southern Hemisphere sky of  Oceania when I lived on a Polynesian island off the Eastern Australian coast.

He absorbed the changing atmospheric pressures of night into his psyche and even the brewing violence of the wind (The Night Wind). Present too were calms and storms on the ocean (The Night Sea), a rich source for musical, compositional inspiration. As we realize, the night also irresistibly gives rise to metaphysical speculation in the imaginative and poetic mind, which we heard in The Witch. I was often put in mind of the inspiration behind French impressionistic musical  traditions of Debussy and Ravel.

The soprano Danae Eleni sang beautifully with glorious tone, timbre and intonation in the original Russian of the composition (an almost revolutionary decision just at present in Poland). Again Tobias Koch accompanied this demanding music most effectively with refinement and subtle taste, especially in the challenging solo piano works centered on the Sea and the Stars

I recently reviewed a fine concert centered around Chopin's Last Days given by Tobias Koch and Dorothee Mields as part of the 18th Chopin and His Europe Festival in Warsaw. I have reviewed his excellent and inspiring playing and recordings on period instruments many times over the years.

(you will need to scroll down a little)

My early experience of contemporary classical compositions has given me a deep sonic and emotional insight into the established classical repertoire. I studied the harpsichord as well as the piano for many years in London. Cochran has also been influenced by baroque music to the extent of writing Four Pieces of Noble Sentiment for pianoforte - Minuet, Courante, Rondeau, Forlana.

A most pleasant and in many ways spiritually uplifting evening reminding us of the creative power of human nature rather than the present brutally murderous and destructive side of the human coin.

Oh! And I hope you, my readers, are having a lovely Christmas Eve. I wish you all  good fortune, rich and therapeutic musical encounters, boundless health, exotic travel, warm experiences in love and romance, helpful prosperity and the possibility of European peace in the New Year !