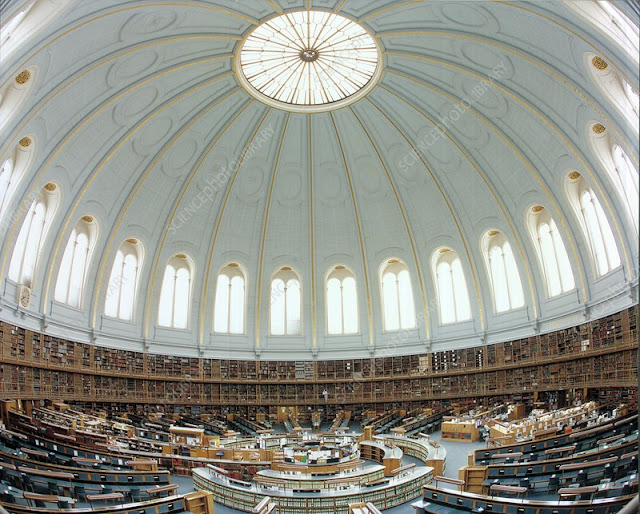 Another wave of nostalgia breaks over me as I pick up a forgotten book that influenced my past thinking in many ways, Colin Wilson's remarkable and increasingly relevant 'The Outsider', written in the Round Reading Room of the British Museum. Too poor to rent a room, he slept at night in a sleeping bag on Hampstead Heath in London. He spent his days reading and writing in that intellectual domain, searching for the nature of a more permanent heightened reality above the banality of everyday life. Nostalgia has been sweeping over me recently fro past excitements, well submerging me really, as I contemplate republishing a few of my books in foreign language editions.
I have such fond memories of the old Round Reading Room at the British Museum which have come flooding back. Two of my books on travelling in the seductive South Pacific, the island provinces of Papua New Guinea and an historical novel set on Norfolk Island in Oceania were completed in that inspiring space. I consulted hundreds of Victorian Parliamentary Papers and their accounts of the unparalleled cruelties of the system of convict transportation to Australia allied with the horrors of ungoverned 'xxxxxxx' which led to the abolition of the punishment (the Victorians could not even write the unmentionable word 'homosexuality' in official accounts). Obscure details of forgotten regimental uniforms were researched. The blue dome arched above me as the azure sky over the Southern Ocean.
www.michael-moran.net
Turquoise leather seats were worn soft and comfortable by generations of researchers. The leather folding reading frames above each desk were illuminated by a green shaded lamp with brass fittings. Leather-bound volumes lined the higher reaches of the walls with gilt-lettered spines protected by gilded mesh screens. A rare perfume of scholasticism hovered about the place. The room possessed a singularly English character and style, something fast disappearing today, undefended.  Many of the greatest writers wrote great works of literature under this papier-mache covered dome modelled by Smirke on the Pantheon in Rome, the phantoms of their minds seemingly imprinted forever on the air. 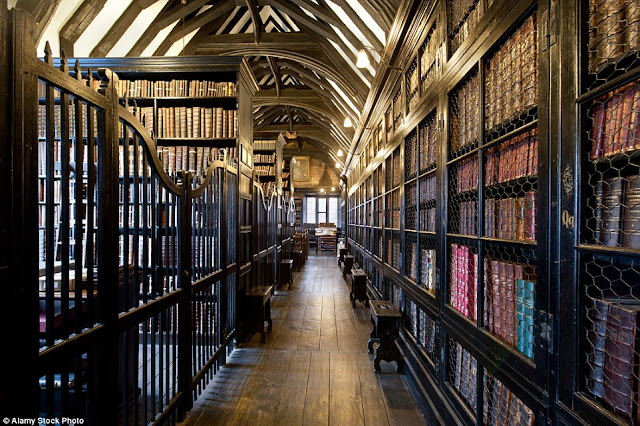 Books were ordered by filling out small slips of paper in duplicate by hand, outlining one's requirements and desk number. I collected them for my bibliographies and have them still tied in bundles in a trunk in the attic. Then a short wait ensued for the delivery. Whispered advice could be obtained from selfless assistants who possessed a seemingly encyclopaedic knowledge of 'the stacks'. It  was all terribly personal and cosy, even intimate in its reverential silence. Serious registered researchers used the library in those days, an elite in many ways. Just the possession of a Reader's Card was an intellectual honour in itself at the time, a sign of being engaged on some 'great endeavour'.

The ghostly movement of silent beings drifting across the room wrapt in the intellectual demands of their arcane subject always fascinated me. The gentleman's club atmosphere and hidden alcoves enabled the forbidden, the tachycardia of the illicit and the rendevous (I am told) of many affairs of the heart. Also the enchanted domain for the sudden meeting of brilliant minds and the interchange of the arcane knowledge that accompanies significant human intellectual endeavour.

Opened on the 2 May 1857, I was present on the last day in 1997. I had taken in a bottle of champagne to celebrate the years I had spent researching my 'masterpieces' and secretly opened it as the afternoon wore on. Suddenly an attendant came up behind me.

"Are you drinking in the library?" she shot out accusingly.
"Yes, I'm afraid I am afraid I am. Terribly sorry."
"You will be expelled immediately! You will lose your Reader's Card and never return!"

I noticed an affecting flicker of irony cross her smiling face, one that had been devoted to intellectual service for decades. After all it was the last day in those august surroundings for all the readers. None of us would be coming back. We all drank the champagne that was handed out that melancholic early evening to the few sentimental stragglers who chose to remain until closing time. We cheered sotto voce and shed a few tears. One of the most moving occasions of my life. 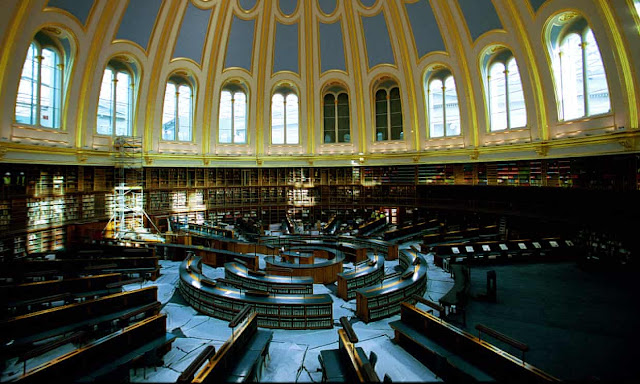 The immortal days were complete. The Victorian era with its characteristic reverence for scholarship cradling in an embrace of care, warmth, quiet and comfort, a room once at the cutting edge of 19th century technology, had given way to the digitized age of cool, efficient computing, more 'democratic' perhaps in access but generally less imbued with deep altruism and love. The Reading Room was reopened in 2000, allowing entry to all visitors, and not just library ticket-holders. A collection of 25,000 books focusing on the cultures represented in the museum were offered along with an information centre and the Walter and Leonore Annenberg Centre. In 2007 the books and facilities installed in 2000 were removed, and the Reading Room was relaunched as a venue for special exhibitions.
The new British Library is of course an astonishing facility, one of the great world libraries. However, like much in current life the enormous pressure of contemporary scholastic demands has caused it to evolve into a supremely technological machine and it has necessarily lost the monastic feel of a place frequented by  'the sacred seekers after knowledge', an aura I infallibly experienced every day in the hushed atmosphere of the old Round Reading Room. After all I spent some of the best years of my youth immured in there...

The British Library today is a very different place. I spent 6 years there writing and researching and writing the biography of my great uncle, the glamorous concert pianist Edward Cahill. These days whenever I need to renew my British Library Reader Pass the procedure has changed and is becoming increasingly technologically automated. This is not surprising as I only need to renew it every few years and the number of 'registered users' of far wider persuasions has increased enormously and we are assured 'democratically'. Scholarly privacy has evolved into a brisk competition for seats. Staff are increasingly pressured and may even resort to unprecedented strike action over conditions and pay. However under these more stressful conditions they remain as helpful, charming and friendly as ever they were. But we talked of the past.

Now as I age and Hercule Poirot's 'little grey cells' increasingly flicker out, I stand bemused 'with bicycle clips in hand' before an illuminated screen displaying many options of ambiguous semantic meaning. Recently during a research visit to London I was afflicted by this state of paralysis when an official angel of mercy miraculously appeared at my side to assist. She was Polish.
Since I wrote this entry a fascinating post has appeared on the British Museum Blog written by Francesca Hillier, the Museum Archivist,  concerning the construction and details of the Round Reading Room with engrossing illustrations - even George Orwell's and Joseph Conrad's Reader Applications !
https://blog.britishmuseum.org/the-round-reading-room-at-the-british-museum/